Play is more than fun; it can extend far beyond early learning and kindergarten readiness to a magical kingdom that has entertained millions for almost 60 years. Any discussion about child’s play and how it can influence an adult’s world would have to include one of the great creators of the world’s biggest playground, Walt Disney. When he was only 4 years old, Walt’s family moved to Missouri, and this is when he developed his love of drawing. He also became interested in trains and would watch for his uncle, who was an engineer and conducted the train. When his family moved again, 10 year old Walt was introduced to vaudeville, theatre, and motion pictures. Disney’s early interests are unquestionably reflected in his achievements. 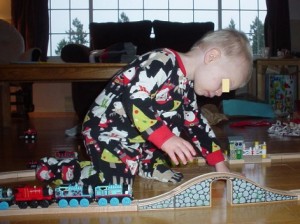 In this series of posts, the adult careers of an astronaut, singer, chef, artist, nurse, scientist, crafter, designer, and mathematician all grew from the passions of children and how they played.  What children choose to play can be quite different from others, but ensuring that all children have time to play is crucial.

For some play fun today, your child might like to play with trains. Trains are just as much fun on the floor as they are on a train table. Not all children will need the tracks to hook up. Kids will play with trains in their own way. Some of the fun and learning will include problem solving, organizing, using space, and imagining. All languages have special words for directions, such as in, out, around, under, over, through, etc. and these can be tricky to learn. It’s much easier to learn these words when there’s a context. Is the train going over the bridge or under it? Not only are there words for shapes, sizes and colors, but there are shapes, sizes, and colors to figure out too. These can all be part of train play.

Walt Disney said “Our greatest national resource is the minds of our children.” Play is how children ‘train’ their minds. Would your child enjoy some train play today?