During play, children can combine something they already know in a new or different way to create new brain connections. Play is important for early learning and it can happen in the most surprising places. 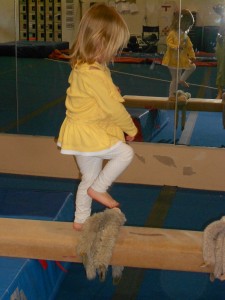 Yesterday afternoon, Little Sister went to a birthday party at a gymnastics facility. She enjoyed jumping on the giant air mattress and climbing up some spongy steps and platforms used in place of a ladder so she could slide down the slide. There was a wide balance beam which she crossed very carefully because 3 bean bag monkeys were draped over it. At first, when she lifted up her foot to step over, she stepped right on the monkeys. She tried again with the same result, but the third time she was able to lift her foot over the monkeys. Having mastered that, she took the monkeys right off and crawled across on hands and knees. It was almost completely the reverse of what I expected. How could hands and knees be more difficult? This wasn’t an increase in challenge after mastering a first step, this was a decrease. Kids can be unpredictable and unexplainable. 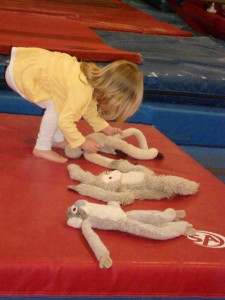 With the monkeys on the floor, I asked, “Why did you take the monkeys off? There are no more monkeys now.” This must have made a connection for her because she began singing No More Monkeys Jumping on the Bridge. The wide balance beam could seem to be a sort of bridge. When I asked if the monkeys were jumping on the bridge, she corrected me that monkeys jump on a bed. She gathered the monkeys up off the floor, laid them on a mattress and began jumping and landing flat out. 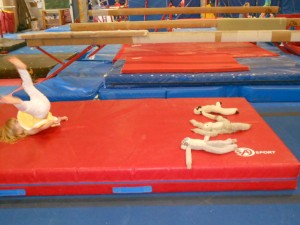 We can’t see inside the brains of children, but we can sometimes see that brains make connections. The action of jumping, the words “no more monkeys,” and the song all linked together for Little Sister. She built on what she had learned before, monkeys jumping on the bed, to make something new, monkeys jumping on a bridge. 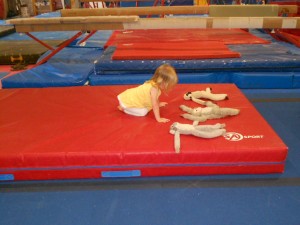 For a play-of-the-day, can you add a new element, new words, or some new twist to how your child plays to encourage early learning and new brain connections? (No More Monkeys Jumping On The Bed but mats are okay.)

P.S. Only a few short hours (sleep time) later I saw this poster from Jeff A. Johnson at Explorations Early Learning. This is what Little Sister was doing as she played, combing knowledge and creating a world–a ‘monkey-world.’ 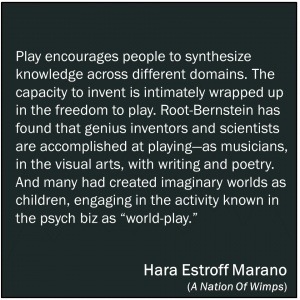 P.P.S. For a play-of-the-day everyday, you can Like us at FB.com/123kindergarten☺