Three days in a row of great weather took us outside for part of the afternoon where we played and had some more fun with math on the playground. 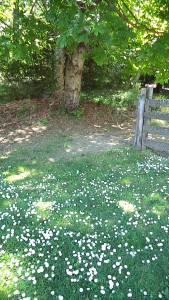 The tot-lot on the corner of our street is just a little space, tucked under the trees, but with a yellow and white carpet of tiny flowers. As we walked up to it, the kids bent down to pick a few of them. The flowers covered quite a large area and I asked if there were more flowers or more trees. Little Sister said, without looking around, there were more flowers because there were so many flowers. Big Sister did check and do a sort of mental estimating. She also said there were more flowers, but the trees were bigger. We had fun imagining what the playground would be like if the flowers were as big as the trees. There wouldn’t be any room to play. That was lots of math to do and included estimating and comparing.

There are  two teeter-totters on  the playground to compare. One holds 4 people and the other only 2.

There are also 3 slides at the playground, two that are small, and one big one. There are more small ones than big ones, but the big one is more fast and more scary. Size is another kind of more.

Big Sister could go to the top of the monkey bars because she is bigger. Little Sister is not yet big enough. She attempted the ladder-steps and needed a little help the first two times but then could do it all by herself.

These bits of math on the playground only added up to a small part of the time we were there. But add up they do. Kids need math experiences to pop up like the little flowers so they can feel confident instead of anxious when it comes to math. Is there space for math fun to bloom in your child’s day?