For young children, a lot of play is taking out and putting in. Almost 2, R is discovering some important aspects of her world as she plays this way. Her mom wrote a brief description of her play: 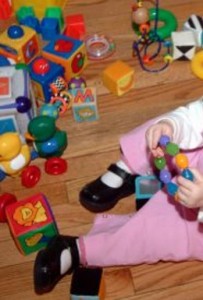 Although at first glance, this looks like R is stuck in a loop, she is testing what’s around her and figuring out how it works. For one thing, when the objects get put in the toy box, they don’t disappear. They still exist to get taken out over and over again. A rock on the ground disappears when it gets put in a big puddle. Not only that, when the toys are all out of the box, there’s a big empty space that wasn’t there before. As parents and caregivers, we can only wish that kids wanted to fill the empty space back up with all the things they have taken out, but that brain connection takes much, much longer to develop—sometimes, not at all.

As objects get moved from place to place, they stay the same. This isn’t true of everything. When a scoop of ice cream gets moved from the freezer to a bowl, it changes. A towel on the floor changes from a pile to something flat when it’s on the hung up.

Kids often feel powerless because they can’t do what they want when they want do it. They have to go in the car even if they want to stay home. They have to leave the toys in the play space at the store even if they want to keep them. Life can be confusing. Being able to move objects around is one way to have an effect. Plus, as a child puts some toys on a couch or chair, they stay there. This is something else to figure out. A ball might roll off a chair, but a block doesn’t. 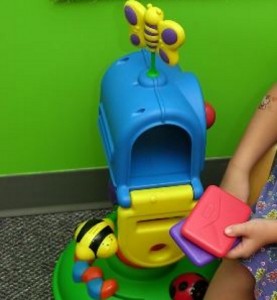 Learning what moves and what doesn’t, what things change, how to make empty spaces and fill them up again, and how to control what’s happening needs a great deal of exploration. Toddlers are all about testing and exploring.

One way to play is taking out and putting in. This might be toys, containers in a drawer, stuff in a handbag, or all the tissues in a box. Is this a way your child plays?