Since it’s apple season, there are lots of fun activities that kids can do for all different kinds of learning and play. Do you know if you put an apple in water, if it will float or will it sink? That’s some simple science that is quite exciting. 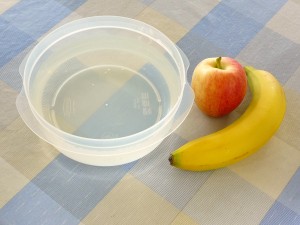 Kids love to try this and the only equipment you will need is a kitchen sink, or bowl of water on the table, and an apple. First, before trying, ask your child to say if an apple will float or sink. This gives kids a chance to predict or make a hypothesis. Use enough water so the apple doesn’t just sit on the bottom of the sink or container and pop it in. What happened? Did the apple sink or did it float? This step is called verifying a prediction.

After doing this the same way a few times, kids can check if the result changes by putting the apple in upside down, or sideways. Now what happens? If you have a different color of apple, do you think it would float or sink? For younger preschoolers, this might be enough but older ones might like to try using other fruits such as a banana, orange, or grape. If there are some veggies in the fridge that need washing, kids can see what they do. Will a carrot float or sink? How about a potato?

Children are natural scientists and are experimenting all the time to see what might happen or what they can do. Sometimes, kids need to be reassured that it’s okay if they guessed one thing and something different happened. There is no right or wrong answer. We guess or predict first because that helps us think about what we already know.

Hmm, now that the apple is really clean, do you know how to make it disappear? (You eat it!) What else can you do with an apple?