When asking parents if they had one wish for kids at school or daycare, one mom wished for more ways of supporting cognitive or thinking skills. Parents want what’s best for their children, phsically and mentally. An earlier post talked about some ideas to promote physical development. This post looks at how to encourage mental skills. 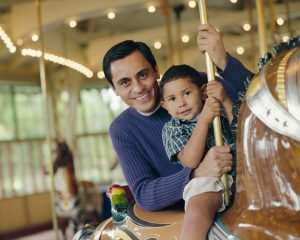 Learning and thinking involve input and output. Young children take in much of their information thru their senses. Babies put everything in their mouth so they can learn about it. They are collecting sensory data. Once brains have information, kids need to process it. This is called cognition or thinking.

We can support development of thinking skills by giving kids lots of sensory experiences. We say that ears hear, eyes see, noses smell, tongues taste, and skin touches. More accurately, ears collect the information and the brain process it. Noses might detect a smell in the kitchen, but it’s the brain that says, “Oh, I smell cookies.” As part of the thinking process, the brain also remembers cookies taste wonderful. 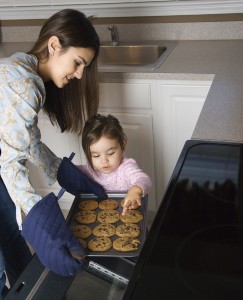 Collecting, processing, and remembering are all part of the thinking package. Language is part of the package too. Brains need not just hundreds and hundreds of words, but millions and millions. A low input of words is about 3 million a year and a high input of words is over 10 million! This means as parents and caregivers we need to talk, sing, and share books and stories. And other family members and friends too.

We can help develop memory by talking with kids about something that has happened. What do they remember seeing and hearing?  When we create  memories, the brain forms new connections and builds on old ones. When kids are able, they might like to draw pictures of special things that happened. Photos can trigger memories.

Being able to pay attention and ignore distractions is part of processing information. As kids play, they are stretching their attention skills. Imagination is another aspect of thinking. Reading books, making up stories, and play are ways to strengthen imagination. 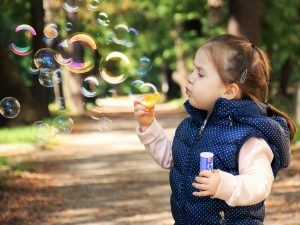 Play is the brain’s favorite way to learn. It’s both input and output. Supporting cognitive or thinking skills means ensuring kids have time and space to play. Can these ideas inspire some play today for your child?

During many Olympic interviews, the athletes mentioned how they had imagined winning. Children’s imagination power can help them in whatever they do too. 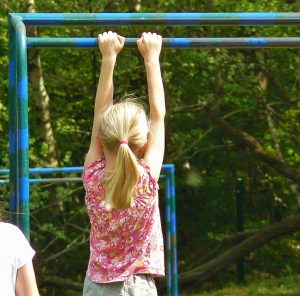 As we watched the performance of the world’s top athletes, we were amazed at the displays of what the body can do. The pole vaulters topped bars over 20 feet – 6 metres in the air. The high jumpers cleared more than 2 metres, almost 8 feet. That’s like jumping the height of a garage or a ceiling. The gymnasts balanced upside down and landed twists and turns on skinny bars and beams, and the high divers sliced through the water at the speed of cars. Impressive and astonishing. But we didn’t see the feats that were happening in their minds. Those would be amazing too. 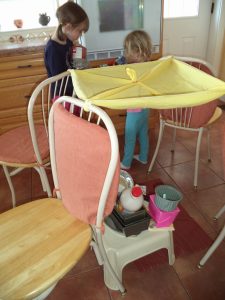 For kids, we need to encourage and support their imagination power. Our role could vary from bringing home an empty box, filling an empty laundry basket with clothes for dress-up, or stretching a blanket over the sofa to make a fort. Kids can take it from there.

When we’re together with them doing ordinary, everyday activities, we can extend imagination with questions and suggestions. When riding the bus, ask your child to imagine what might happen if the bus grew wings. Maybe the bathtub becomes a boat on the ocean. Where will it go? As you prep a meal, be the voices of the fork and spoon and have a conversation. Reading books and telling stories exercises and stretches imagination. Can you imagine if giraffes were diving at the Olympics?

Children’s imagination power can help them cope with challenges and stress as well as excel at sports. For a play-of-the-day, can you imagine…?

When is a box not a box? When kids are playing with a box, it becomes a rocket, a fort, a mountain, Elsa’s ice castle, a Rebel space station, a pirate ship, Santa’s sleigh, the workshop at the North Pole, a stove, a restaurant,  an office, a store, a post office, a car, a bus, an airplane, a boat, a train, a zoo, and whatever else kids can imagine.

When is a wrapping paper tube not a tube? When it’s a lightsaber, a sword for a knight or a pirate, a tunnel for cars and trucks, a tree, a log, a cane, a witch’s broomstick, a magic wand, a cowboy’s horse, a bridge, and like the box, anything else kids decide.

In just a few days at Christmas, kids will be receiving wonderful new toys. By comparison, a box is nothing, but to a child with imagination it can be everything. Both boxes and paper tubes have unlimited possibilities. Playing with a box or playing with a paper tube will engage the imagination.

Why is the imagination so crucial? The brain is not just a collection of special cells called neurons, it is also a  vast system of connections, about 1,000 trillion of them. The early years are the most sensitive time for wiring these connections. The imagination can create new and very different pathways. 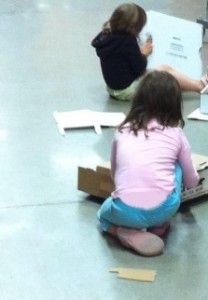 For a play-of-the-day, find an empty box, preferably one that is big enough for a child to fit inside. Kids can color on the box or leave it plain. They will often accessorize with toys or treasures from the recycling.  A wrapping paper tube, or smaller one from paper towels, can be used with or without a box. It can be covered with aluminum foil to make it shiny, or it too can be colored. While it might look like the magic is coming from the wand or box, isn’t it really coming from the kids themselves?

Many parents think they might be zombies by the night of Halloween. It might be time for the ultimate rescue: a Halloween blanket fort zoo. Need a few minutes of focused time so you can get costumes or other Halloween details done? Although it tends to use a whole room, a blanket fort does contain … END_OF_DOCUMENT_TOKEN_TO_BE_REPLACED

Today’s post is brought to you by the letter I for imaginative play. Albert Einstein himself said, “Imagination is more important than knowledge.” The month of October is a dramatic time for the changes in nature and these seem to make a backdrop for the drama of Halloween. No sooner do the green leaves of … END_OF_DOCUMENT_TOKEN_TO_BE_REPLACED

Have you come across the article about a magical childhood by Bunmi Laditan? Making a childhood magical doesn’t require a magic wand, or that parents and caregivers be magicians—altho we often are. This is the second in a series of blog posts about ways to weave some spells for kids. Magic Needs Imagination: Although it’s … END_OF_DOCUMENT_TOKEN_TO_BE_REPLACED

The Lego movie captures all of us in the magic of “Let’s pretend”. Charming and delightful, it appeals to the imagination and sense of play. Did you know that pretend play is important for brains? This kind of play is complex and powerful for thinking and learning, and helps children with early development and kindergarten … END_OF_DOCUMENT_TOKEN_TO_BE_REPLACED

I can hardly wait to try this activity for some winter learning and fun and I know that the play time will help support kindergarten readiness too. On a FB post today, Vanessa Kelly McRostie, shared this super activity that was a hit with her kids. She partially filled 2 large, plastic containers with water … END_OF_DOCUMENT_TOKEN_TO_BE_REPLACED

Before you throw out or recycle any boxes from Christmas, did you know that boxes can be as much fun as the toys that were in them? Today is Boxing Day, and while adults have their traditions, for kids it’s a day for some fun and learning for early development and kindergarten readiness while playing … END_OF_DOCUMENT_TOKEN_TO_BE_REPLACED