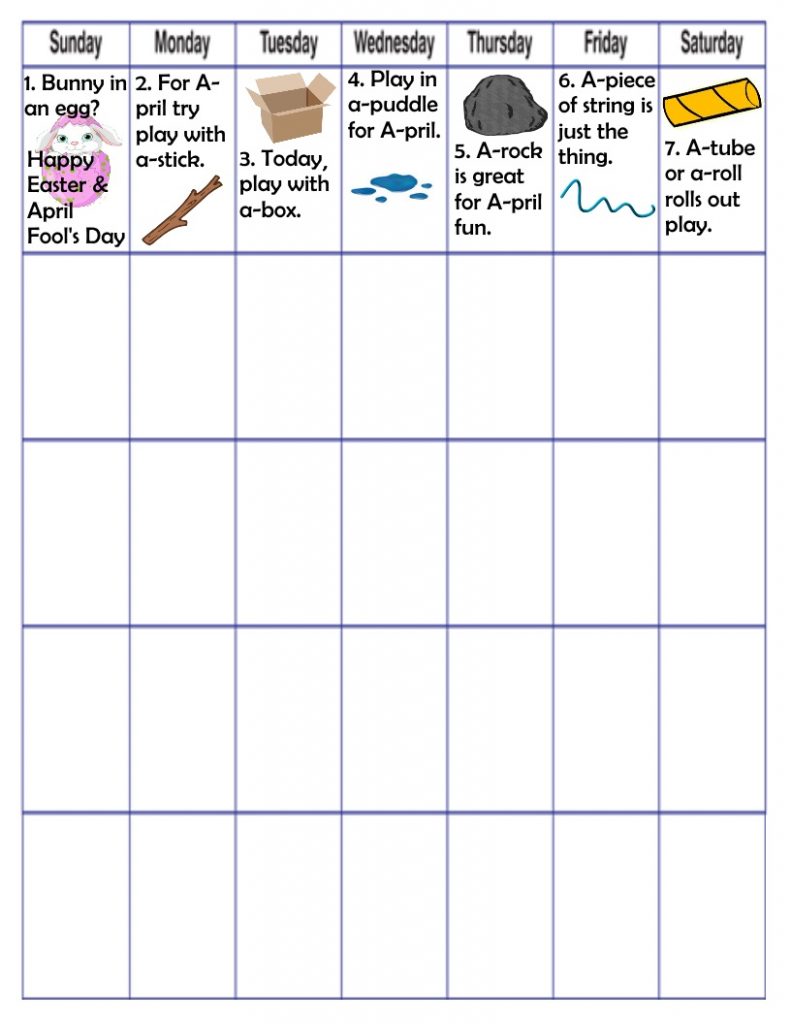 This month we just March right into Easter. The rest of the month is a treasure of more fun and learning play activities for kids. You can enjoy these both inside and out. Print off the calendar and put it on the fridge door or somewhere handy. 1, 2, 3,…let’s play. 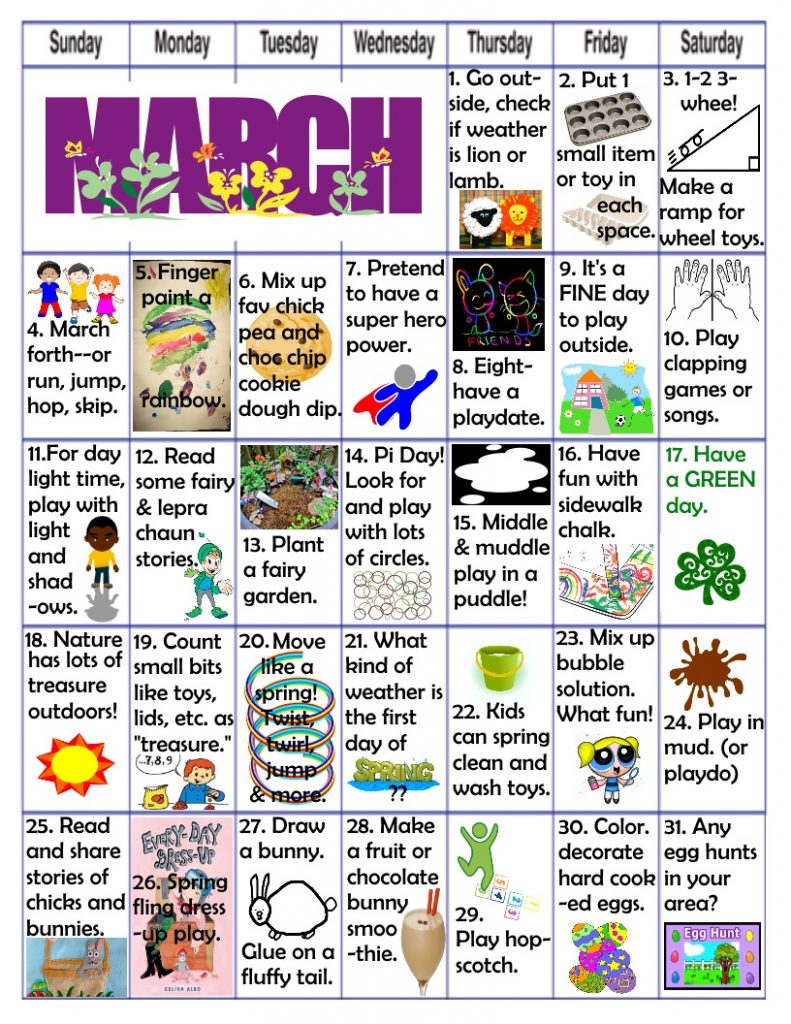 Plastic Easter eggs and some small bits from the junk drawer combined for Easter egg magnet science fun and it was quite an attraction for wee hands. 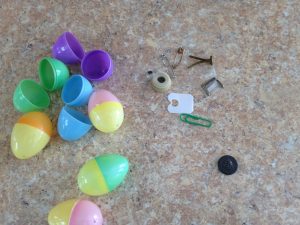 Do you have a drawer in the kitchen to hold all the assorted bits and pieces that don’t go anywhere else? While often called the junk drawer, these things can be treasures for kids. The kids looked thru the items and picked out some small metal, plastic, and wood ones. Then, Little Sister and Big Sister discussed which ones the magnet would pick up and which ones it wouldn’t. Most of the time, they agreed which ones they thought would be attracted to the magnet. Then, one by one, each item was snapped into a plastic Easter egg. 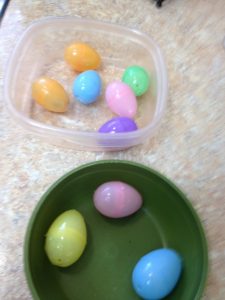 For each hidden object, the kids tried to pick up the Easter egg with the magnet. Some they could but no matter if it worked or not, we opened each egg to see what it was. Some of the items were metal but hadn’t worked so the kids tried again without the egg. They were surprised that a metal tack and metal watch clip did not stick to the magnet but a pipe cleaner did. 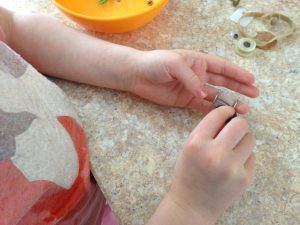 With the magnets and all the pieces, Little Sister wanted to make an ‘advention’ so she began sticking things to different places on the magnet. There were another couple of magnets and some of the objects twisted together. Creating a sort of free-form sculpture kept her busy playing and inventing. This was certainly child-directed play because she suggested it on her own and played as she wanted to. The Easter egg magnet science fun inspired her to try something different for herself. 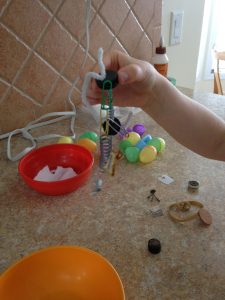 The magnets we used were from old shower curtains. Once the play was finished, all the bits went back in the junk drawer until needed for another play ‘advention’. That’s a good word because play often is an adventure and invention together, isn’t it?

A good chunk of our afternoon was in the kitchen, not baking but at the sink with hands in warm water, for some Easter egg float-sink science fun. A winner! Do you have a junk drawer in the kitchen? We do and this experiment starts with hunting in the stuff for small items that will … END_OF_DOCUMENT_TOKEN_TO_BE_REPLACED

For some spring fun and learning combine kids, nature, Easter and enjoy this treat. We’ve done this activity before and were just waiting for a day to do it again! Do your kids like to hunt for Easter eggs? Crystal, at Crystal and Co calls this Reverse Easter Eggs. Kids start with eggs and instead … END_OF_DOCUMENT_TOKEN_TO_BE_REPLACED

Coloring Easter eggs is a tradition that kids can do year after year and always enjoy. Did you do this as a child? Who first showed you about coloring eggs?  I’ve done it for so many years with my own kids and students it doesn’t seem like Easter until I do. With the Star Wars … END_OF_DOCUMENT_TOKEN_TO_BE_REPLACED

It’s not quite time to color Easter Eggs, but the kids can’t wait so we’re having some Easter egg and bunny play dough fun. Great for hands and paws. This activity can use either ready-made or home-made play dough. Plasticine is stiffer to use until it warms up but it will keep indefinitely. While any … END_OF_DOCUMENT_TOKEN_TO_BE_REPLACED

A hunting we will go, a hunting we will go; we’ll look for eggs to fill our pails, and then we’ll eat them all. The rhyme may not work, but the description is more accurate. An Easter egg hunt for kids includes all the senses and is more than fun. As a sensory activity, and … END_OF_DOCUMENT_TOKEN_TO_BE_REPLACED

When it comes to Easter and tasting, chocolate is the overwhelming favorite, but other flavors make Easter a treat for the sense of taste. Exploring the senses promotes brain development, early learning, and kindergarten readiness. Here’s a fun sense of taste Easter activity, using a little chocolate and fruit. There’s often a container of yogurt … END_OF_DOCUMENT_TOKEN_TO_BE_REPLACED