March seems appropriate for a post on kids’ goal-setting skills because marching is steady and purposeful. Developing these skills is child’s play. 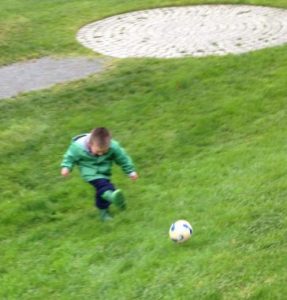 Babies, toddlers, and young kids are strongly motivated—for some things that is. A baby will struggle to find a way out of a crib, and a toddler or older child will stack blocks, toys and rearrange furniture to reach the cookies.

Kids will set their own goals as they play. Little Sister wanted to cross the bridge at the playground all by herself. She held on the edges and slowly took one sideways step at a time. She asked me to stay back and only watch. Big Sister wanted to go down the waterslide at the pool and she’s finally tall enough. I had to stay down with her sister so she went up by herself. 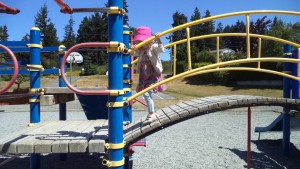 Some goals children choose are realistic, like putting together a simple puzzle, but others are not, like building a block tower so high it reaches the sky. As kids play, they will figure out which ones that can do and which they can’t. As a strategy, goal setting is tremendously powerful, and we can support children’s learning by ensuring they have time and opportunity to play.

Basically, goal-setting is a three-step process: deciding on the goal, figuring out how to accomplish it, and taking action. When we notice, children wanting to do something, we can ask them how they might be able to. This moves them to the second step. We can also break a big task into smaller ones for them. For instance, the goal might be to get all the toys put away before going to the park. We can suggest they put away all the blue toys, and we’ll help with the red ones. Celebrating their success with them when they accomplish a goal also encourages them. 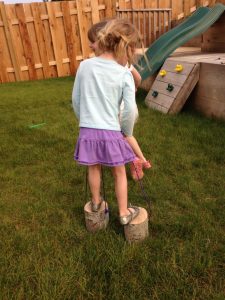 As children play today, how can you support kids’ goal-setting skills?

Did you know that comparing sizes is a complicated thinking skill?  It’s a great deal more than learning the words big and little and requires considerable brain connections.

Size is all about relationships instead of being about the bigness or smallness of something. A riding car is pretty small compared with a real car, but it’s pretty big compared to a matchbox car.

The riding car hasn’t changed its size, it stays the same, but it can still be big or small at the same time.  No wonder the brain has a challenge figuring out sizes. Young children need lots of experience with using the words for sizes and with comparing objects. 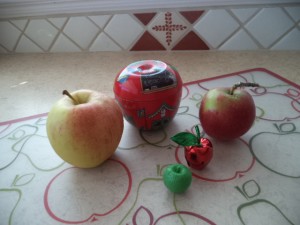 When cutting up apples for a snack, I asked if the kids wanted big ones or small ones. Of course, they wanted big ones. I then showed them that the small apple was big when compared to a really small toy apple. We teased and played with some other apples making lots of different big and small ones.

This apple puzzle uses sizes to make a sequence. Other toys can be used to give children an opportunity to explore sizes. So can the measuring cups and spoons in the drawer or even the shoes at the door.

As with other strategies and skills, kids need lots of hands-on experiences to figure out sizes. With kids, maybe we could say that big learning comes in a small size?

Imitating is a powerful strategy that children use for learning; babies as young as two or three weeks old can imitate a simple facial gesture, such as slowly opening and closing a mouth. (Meltzoff/Moore, Uni. of Washington) As they play, older infants and toddlers show much more imitation of adult behaviors. This is one reason why so many children’s toys are small versions of objects that adults use, such as play kitchens and cars.

Perhaps, this infographic helps explain why children imitate adults as they play. Kids are connecting information that they know by creating an experience, using their imaginations. 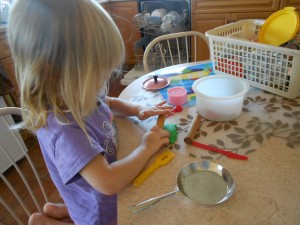 That’s what Little Sister was doing with a chunk of playdough. With a big bag of apples from a friend’s backyard tree, we made apple pie. Later, when playing, Little Sister wanted a ‘roller’ so she could make some too. She certainly didn’t have all the steps, but she remembered a few of them and rolled out the crust and put it in pan. She sprinkled some sim-nim (cinnamon) and then invited all of us to try some of her pie. We pretended to eat and told her it was yummy.

The saying “Fake it until you make it,” is advising adults to imitate. It’s such an effective learning strategy that it is used in robotics to make programming more efficient. We can promote children’s use of imitating with action songs such as the Wheels on the Bus, Hokey Pokey, etc. There are many toys for imitating and games such as Follow the Leader.

No matter what’s on the agenda for the day, likely a big part of your child’s play will be imitating some adult activity in one form or another. Combined with imagination, it’s a fun way to learn. What do you notice that your child likes to imitate?

P.S. This video shows 2 kids creating an experience as they play. Sometimes, life with kids gets so messy, the best choice is to get out the camera…

Where is the Mind, Anyway? Last week, I heard an interview with Sam Keane, author of a new book called “The Tale of The Dueling Neurosurgeons.” In his book, he explains that for much of history, the mind was considered to be located not within the brain but within the heart. Unfortunately, it seems that … END_OF_DOCUMENT_TOKEN_TO_BE_REPLACED

Parents and caregivers often ask what young children need to know before kindergarten; this is the final post in this series on kindergarten readiness and early learning basics. No matter the age of your little one, this will give you a general picture of what to do as your child’s very first teacher. Kindergarten readiness, … END_OF_DOCUMENT_TOKEN_TO_BE_REPLACED

Have you heard all the Olympic athletes talk about setting goals for themselves? Some were successful in achieving them and some terribly disappointed. But they all had something to strive for. How about children? Do they set goals? They surely do. We sometimes call it by less positive names as a baby in a high … END_OF_DOCUMENT_TOKEN_TO_BE_REPLACED

Supporting your child’s play activities is an important way to encourage kindergarten readiness. While playing may not seem to be a learning strategy nevertheless children’s brains are exploring and connecting in countless ways. Children are practicing valuable thinking skills as they play. They are tuning in to all sorts of social cues and practicing how they work. In … END_OF_DOCUMENT_TOKEN_TO_BE_REPLACED

Ready to cook up some kindergarten readiness? Whether he knew it or not, this young boy was showing another critical learning and thinking strategy. It’s hard to see in the photo but as he was cooking in the play kitchen he was also sorting the small toys. The cars and trucks are in the little sauce pan … END_OF_DOCUMENT_TOKEN_TO_BE_REPLACED

One…two…and kindergarten readiness makes three! “Watch me, watch me,” said the wee voice and I dutifully watched. “I’m going to jump all the way, 1 2 3.” And she did. The task could be anything, but I realized as I cheered on the jumping toddler that what children are doing when they ask us to watch … END_OF_DOCUMENT_TOKEN_TO_BE_REPLACED

Reading, ‘riting and ‘rithmetic may be the 3 R’s but there is another R that is especially helpful for young children and kindergarten Readiness: Routines. Yes, routines is an important learning and thinking strategy. I will admit that I’m not greatly fond of having routines. ‘Whatever’ or ‘whenever’ are words I use often. But I’ve had … END_OF_DOCUMENT_TOKEN_TO_BE_REPLACED