Using the senses to explore information about the world is part of kindergarten readiness. Children build a background of experiences that they can use in new learning situations. Usually flowers have a lovely perfume. Even several sniffs of these flowers wouldn’t help. They look lovely but have no smell. Now this young girl has learned that not all flowers smell and has expanded what she knows about them. 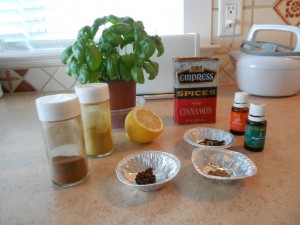 To have some smelling fun at home, it’s not hard to find things to smell. In just a few minutes, I found several spices including cinnamon, cloves, curry, and allspice, and a lemon, a basil plant, and some essential oils. Big sister had fun smelling them and explaining what they smelled like. The cinnamon smelled like toast, the basil smelled like the sauce on noodles but she didn’t like it. The curry was yummy as were a few others.

Just a few things to sniff stimulated more than the sense of smell, there was lots of language in the activity too. After using our noses, I asked my elbow if it wanted a smell. That prompted some information from the little helper about what parts of the body could smell and what couldn’t and why. Then, we talked about what else noses could do. Noses can make clown faces and that’s where the fun went next.

For a play activity, kids could try mixing two spices together and check out how that changes the smell. Kids could pretend they are cooks or scientists making secret formulas. What happens with 3 things stirred together? Are there some smells that your child can use at home for sensory fun and learning?