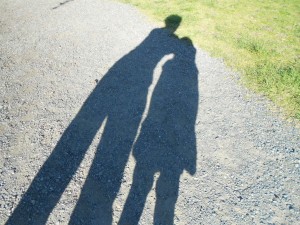 1, 2, 3, I’m as tall as a tree, in a shadow that is. Today’s fun, learning, and kindergarten readiness play-of-the-day has been inspired by shadows –and fall sun.

There were a few sunny breaks in the day where we could go outside, but not until later in the afternoon, so it was a good time for some shadow play. Did you know that making comparisons is a critical thinking skill? For kids to be able to say that something is as big as something else, they need to be able to think of both of the objects and picture them together. 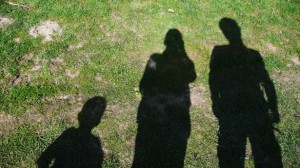 Not all comparisons will be things that children can see. They may also be comparing actions or events, like “I had a longer time to play yesterday.” That requires memory. We’ve all heard kids say “I’m bigger than you are.” Or faster, or smarter, or older, or dirtier, or hungrier, etc. When making a comparison, children are not just passively looking but actively processing the information.

Comparing is not just a thinking skill, it can also be a strategy. Whoever is hungrier gets to eat first or whoever is older gets to stay up later. (It may not always be an efficient strategy but it’s worth a try.) Comparing three gets even harder.

Besides making comparisons, it was fun to play with the shadows. Stepping on a shadow head doesn’t hurt. Shadows can change sizes and make strange shapes. It’s fun to jump up and try not be attached to a shadow. Not for long! Will the weather let your child have some fun in the fall with shadows?