Ideas to support learning, fun, and kindergarten readiness can be like ghosts: they just appear out of thin air. Well, in this case it wasn’t out of thin air, it was out of paper and crayons. Last week, Big Sister made some paper doll mummies using white paper and a black pen. This time we did the opposite, making skeletons out of black paper and a white crayon. While we were comparing the two, I mentioned that they were opposites. She, of course, asked “What are opposites?” so we talked about them and then did the actions for a few. 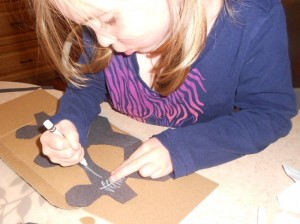 Learning opposites can be tricky. Some, like up-down, on-off, in-out, and empty-full, are easy. There’s not a lot of variation, things are one or the other. But other opposites, like open-close or big-little depend so much on the objects. If the fridge door is mostly closed but even a wee bit open we say that it is open, while if the bedroom door is mostly closed but open a small amount we say that it is closed. Big Sister is big compared to Little Sister, but both of them are small when standing next to adults. No wonder it can be hard for young children to figure out what we mean.

While Little Sister doesn’t understand the word opposite, she certainly knows some of them, mostly the opposite “No” to anybody else’s “Yes.” The opposite “slow” also doesn’t exist for most kids, unless grownups are in a hurry. Being able to understand and use the words will take lots of experiences and opportunities. It’s a complex strategy and important thinking skill. Halloween is a perfect time for the opposites light and dark. And visible and invisible. Trick and treat are sort of opposites too! What are some other Halloween opposites for young children?