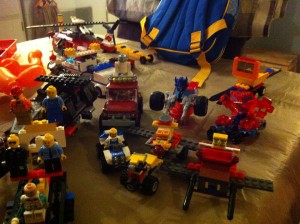 Lego and Duplo are fun toys for both boys and girls, supporting their early learning and kindergarten readiness in all kinds of ways. Girls, as well as boys, will choose Lego and Duplo for their play. These pictures of Lego creations were made by a boy and girl of the same age. Can you tell which is which?

Recently, there has been some controversy about Lego making sets that are specifically marketed to girls. One of Lego’s toy analysts, Garrick Johnson, explained what Lego discovered from their research: “When boys build a construction set, they’ll build a castle, let’s say, and they’ll play with the finished product on the outside. When girls build construction sets, they tend to play on the inside.” (Neda Ulaby, June 29, 2013, monkey see) 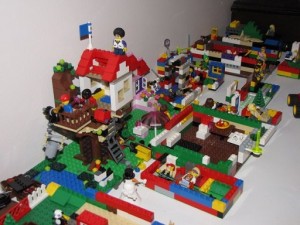 This reflects a difference that is sometimes seen in children’s drawings, where boys tend to draw action, and girls draw something that has to do with relationships. In the two pictures above, each of them show an extensive amount of construction. They both have a lot of little people One of the pictures is vehicles and the other is a town. Now is it easier to tell?

More research is needed about gender and play, but Lego is a great toy for all children. The size of bricks and how children play will also depend on the age. The bigger blocks are a safer choice for young children. The different accessories can be matched to a variety of interests. Some children may want all the farm and zoo animals while others prefer the trains and cars. Kids will also add other toys; they do not have the same ideas as adults about what goes with what.

For a play-of-the-day, are there some Lego bricks at your house? What can your child build with Lego?