The Magic of Having a Special Place

While we’d all like to give our kids a magical childhood, sometimes instead of giving we need to take something away, as in letting our kids have a space for themselves. Three families that I know were all busy on the weekend making a play space for their children. 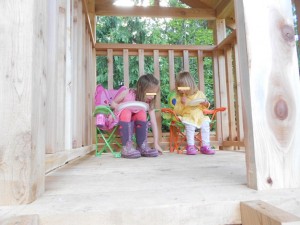 What is so appealing to kids about having a space that doesn’t include grownups, at least for a good part of the time? In their own space, kids get to be in charge. It’s not easy to be little and young and not understand what’s going on. From their angle so much closer to the ground, kids can’t even see everything that is happening around them. They often feel that they don’t have much control. The small size of a play area or structure is a better fit.

Think of an adult who doesn’t like to be rattling around in a great big house because there’s too much lonely room. Also, a smaller space limits the action to a much more manageable chunk.  We all like to feel like we have some influence on what is going on around us and that’s more likely in a small play house.

Kids have a need for independence and, at the same time, a need for security. In a playhouse, kids can feel on their own and still surrounded by the family or adults in a care facility. It’s not so big that it’s scary but the play is definitely child-led. Like some things in the story of Goldilocks, it’s just right. Speaking of story, a play space is big enough for lots of imagination. It can be a boat, store, kitchen, campsite, restaurant, rocket, spaceship, or anything else that appeals to kids. If the play space is outside, there are additional benefits, such as being closer to nature and able to experience the sun and wind.

Play houses can be made with something as simple as a big appliance box, for some temporary fun inside or outside. Whatever or wherever they are, they are a magical place for kids. Do remember one from your childhood? Does your child have one now?

(Thank you for sharing the picture, Ross Dunn (RossDunn.com). Can you share with us about the kids and play over the summer?)