Cooking with kids is a play-of-the-day activity that you can do anytime because it helps them be more aware of what they eat and make healthy food choices. We made some apple ‘sandwiches’ that have no bread and were almost as good as s’mores. 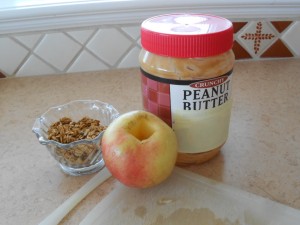 Big hands need to carefully take the core out of the apple before slicing. A pointy potato-peeler will work. Once that’s done an adult can slice the apple into rings. Using a plastic knife, kids can spread peanut butter on a ring, or in case of allergies, any other nut bread or spread. For some crunch, sprinkle on some granola, sunflower seeds, raisins, and maybe a few chocolate chips. Put another apple slice on top and munch. We made some and they were a delicious snack. 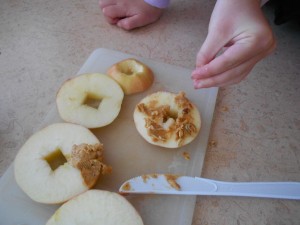 This activity can’t really be called play but it was lots of fun. Kids like to be included in tasks and enjoy being able to participate. We all like to contribute and feel that our efforts are valued and that’s true for kids as well as grownups. In addition to the fun, there was some early learning too. 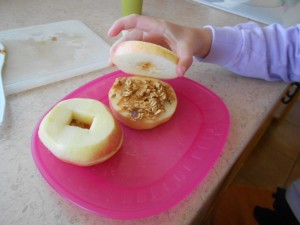 In this recipe, sequence was very important. The apple couldn’t be sliced until the core was removed. The instructions said to slice into rings. Slicing the way we usually do wouldn’t make rings, so following instructions carefully was necessary. It was hard to spread the peanut butter on the slice and this required some problem solving. We tried a few different ways and discovered we could spread it by starting at the side. There was lots of discussion, some negotiating about chocolate chips, and cooperation. Math was also involved. The apple made five slices and each sandwich needed two. How many could we make?

This was an easy recipe to do with kids and nutritious too. Do you have some other suggestions for cooking with kids?