Kids don’t need a magic wand to transform themselves into superheros, princes and princesses, fairies, knights, animals, pirates, warriors, robots, scary creatures, and movie characters. They only need a costume and Halloween is the biggest costume party of the year. Kids do not only dress up at Halloween; often, they do it all year long. But with so many people wearing costumes, this is the most exciting. 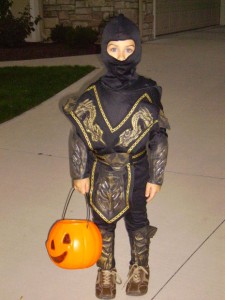 As kids try on a costume, they are also trying on some new behaviors and ways of interacting. Children need to explore how we relate and connect to others: as the powerful boss character, the rescuer, the leader, and others. What does it feel like to give orders? Or, to be the one that does the rescuing, for a change? Costumes help kids with their new ‘identity’ as they try out different ways of interacting.

This pretending and imagining helps with development in many ways. Children test out what they already know to see if it “fits”. Dressing-up also encourages empathy. When kids pretend they are different people, they become aware of other peoples’ point of view and see things from a different perspective. They use their imagination to imagine how others feel.

Besides interacting and imagining, there are new ways to use language. What would a firefighter say, a policeman, a princess, or an animal? There’s lots of creative thinking and problem-solving. Costumes may be part of a story and kids get to act out and tell the story in their own way as they wear a costume. Pretending one thing is something else, such as a long wrapping paper tube becoming a pirate sword, is called symbolic thinking and it’s a valuable thinking strategy for all kinds of learning.

Costumes at Halloween, and any time of the year, are an exciting way to play. What or who will child explore this year?