Because dinosaurs were big creatures, they have big body actions. Big body movement and play is critically important for children’s healthy development–not just for bodies but for brains too. 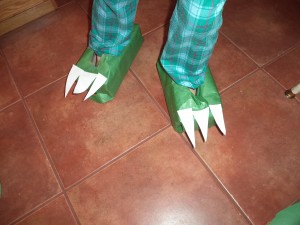 Kids do not just like to move, they must have active play. Young children have to figure out how their body works and also how to create specific movements. This is a mental challenge as much as a physical one. Brains need to come up with a solution about how to move and coordinate the required actions. As kids move their brains are forming the pathways and links not just for actions but also for learning language and math. 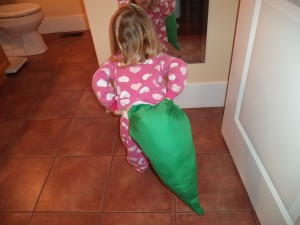 Kids can pretend they are dinosaurs with no more props than the words to suggest being a dinosaur. Some easy props are tissue (kleenex) boxes or big slippers to be dinosaur feet. A tail can be created with pieces of cardboard or fabric. This tail is a big triangle folded over, stitched, and stuffed. To make points that stood up instead of flopping over wasn’t as easy as it looked on various other blogs and websites, so this tail doesn’t have any at all. (Sigh, another “nailed it” project.) A length of elastic sewn to each side makes a circle that goes around a child’s waist. It’s flexible enough for different ages and sizes of kids. Stuffing the tail was a sneaky ‘no-guilt’ way to use up scraps of fabric too big to throw out and too small to save.

How do dinosaurs move? They take big steps and jumps. Some can fly or swim, but mostly they are slow and maybe…they only run in the house in slooow motion? How does your dinosaur move for big body play?