Inspirations from Cecil the Lion 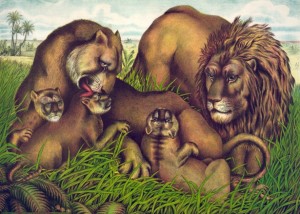 Since the news of Cecil the lion’s death, I have been trying to sort out my own reactions and how it relates to children and compassion for animals. Even after a few days, I’ll admit to having more questions than before. Questions like: Why don’t we have better laws to protect animals? Why is this legal? Can we teach kids to have compassion for animals? And more. 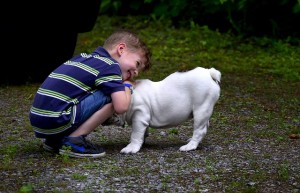 When it comes to compassion for animals, it’s much easier to want to protect majestic creatures such as lions and elephants. But where do we start for kids? For children, the creatures that they are most familiar with would be cats and dogs.

Parents and other adults constantly remind little ones to be gentle, gentle. We explain to kids pulling the cat’s tail really hurts. By our example, we show kids how to touch cats and dogs. When out walking, we teach kids to ask owners of dogs if it’s alright to pet them. But is this enough? What about smaller creatures like bugs and worms? Do they count? 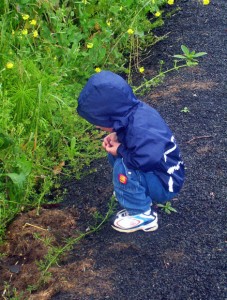 There’s a popular quote by Bradley Miller, “Teaching a child not to step on a caterpillar is as valuable to the child, as it is to the caterpillar.” In the 1980’s, Brad Miller helped to found an organization concerned for animals. This tells us what, but not the how.

How can we encourage kids to be compassionate? One way is certainly by having a pet, such as a dog, cat, rabbit, hamster, or guinea pig, but this isn’t an option for all families. Instead, kids might be able to have a caterpillar or other small creature. 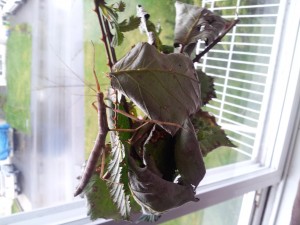 This is a picture of Branchy, a stick bug who lived for many months with two young children. He was well loved. Also, when we spend time outside in nature, we can look around for small critters and talk about them and their place in the world. When we discover bugs in the house, we can release them outside.

Today, for a play of the day, in honor of Cecil the lion, can you spend some time in nature with your child with the intention of noticing creatures around us, no matter their size? Could it be that compassion starts from the ground up?