With summer half-over, it’s time to start thinking about kindergarten. Kids need backpacks and toolboxes—well, a toolbox of interpersonal skills for school. 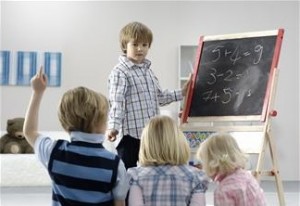 Some research published just this summer in the American Journal of Public Health has sparked some very interesting discussions. Hundreds of kindergarten kids were followed for almost 20 years! The results showed that social and emotional skills were a better predictor of future success than academic ones. The study not only looked at test scores but also employment and crime. Perseverance, self-regulation, self-discipline, and empathy were key.

Put yourself, for a moment, with a bunch of kindergartners. Then try and predict which one of them might finish college and get a good job two decades down the road. Is it the kid who knows her ABCs or the kid who has a good memory? Well, new research has tracked children from kindergarten into young adulthood, and it’s found that the most important predictors of long-term success are not intellectual skills but social and emotional ones.

Researchers did not ask the question though, about how children learn these skills and strategies and when. Does it happen in kindergarten? Well, to some extent, but the teachers of these traits are parents. The most sensitive time for children’s development is before the age of 5, before kids arrive at school. The first classroom isn’t kindergarten, it’s home.

This doesn’t mean parents need to turn the house into a kindergarten boot-camp. Plus, the brain learns best during play. In following posts, we can explore some of the practical ways that parents can help children learn these critical life-skills. For today’s play-of-the-day, choose a favorite way that your child likes to play and think of it as ‘home-work’. Will your day get top marks for PLAY?