Before kids go to school, it helps if they have had some experiences, especially fun ones, with letters. As we read to kids, when we move a finger under the words, kids will look at the letters. Instead of being totally strange, gradually the brain notices it’s seen some of those squiggles before. You can try this for yourself. See the sentence written below…

Some of those words are not at all familiar, but you can probably figure out it’s Twinkle, twinkle little star even if you don’t know Chichewa. Now check out this one…

You can see there are 4 words and some letters are the same or similar, but some are new. And then another…

That one is Thai. And very unfamiliar. The Chinese and Arabic were even more different. Kids develop pictures of letters in their mind just by seeing them in books, having us show them in signs, noticing them on their toys, and more.

We can also encourage kids’ familiarity with letters by having magnetic or foam letters for playing. Hands-on opportunities give kids a chance to explore letters and turn them into old friends. They are far less intimidated by letters when it comes to learning to read. Other play experiences might be making letters in play dough, tracing them in sand, and drawing them in chalk on the sidewalk.

For some fun and learning today, is there a way for your child to have some alphabet and letter play? Oh, and after all that, also sing the Alphabet Song to the same tune as Twinkle Twinkle Little Star? 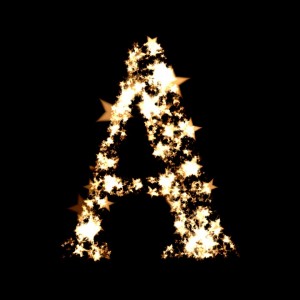 P.S. I think I might use this on FB this month. Mrs. A in stars!