A popular author, Richard Louv has another great resource to encourage outdoor time for young children-Vitamin N: The Essential Guide to a Nature-Rich Life. The book includes 500 ways for families to spend time in nature. 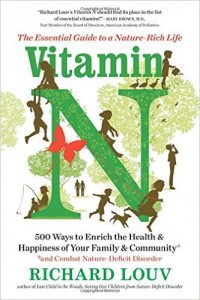 In the space of one generation, kids have become divorced from nature. They no longer spend most of their available childhood time in the yard or the neighborhood. They don’t even spend a good chunk of time outdoors. Some staggering new research is finding outside time to be about 7 min a day. This might not be the case for your child but compare outside time now to how much you had. Does it come close?

This is having a huge impact on kids: higher obesity, increased ADD, higher rates of anxiety and depression, lower levels of Vitamin D and more. It’s also having an impact on brain development and learning.

The sun tempted us outside and, along with a couple of cousins, there was plenty to do. Lou, who is just 3, liked to dig. He would dig a small shovelful of dirt and gravel and, holding it flat, make a beeline for a hole across the yard. When he got there, he dumped the rocks into the hole and headed back for some more. He did this over and over and whenever anyone else came close, he would announce. “I dig.” This wasn’t just idle play, he was on a serious mission. The other 3 children ran around the yard engaged in pretend play, but Lou wasn’t distracted. Focused on what he was doing, his interaction with his cousins was limited. 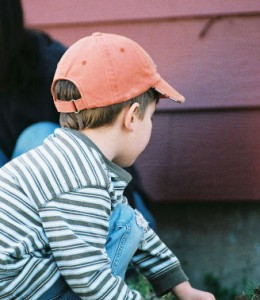 This is typical play for a three-year-old. Often, they play beside others rather than with them, until their play becomes more social. Unplanned and unprompted by an adult, Lou directed his own play. But there was no doubt he was happy and involved, enjoying his time outdoors.

Instead of house arrest, kids need a large and daily dose of Vitamin N-nature. The activity can be spontaneous or planned. Shovels are optional. For a play-of-the-day, how about some outdoor time for young children?