When cars, trucks, trains and other toys are spread out on the floor one way to extend children’s play is making patterns with transportation toys. 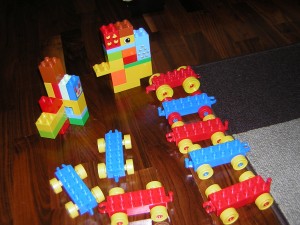 Little Sister was playing with her Duplo train and blocks. As she played, I lined up a few cars in a simple pattern of red/blue, red/blue and put some other red and blue ones close by. Instead of interrupting her, I talked to the train cars and said, “Hello train. Did you see I put some cars in a pattern? They go red, blue, red, blue. It’s just the same.” I asked Little Sister what color of car would come next and said the color names while pointing to the cars. Together we figured out a red car would come next. She was able to say blue would come after the red one by herself.

Why is making patterns important? The amount of information coming at the brain can be overwhelming. One way to reduce this overload is by noticing and using patterns. Instead of remembering the colors of 5 train cars in a row, the information can be condensed to red and blue. Because a pattern is repeated, that row of train cars could be expanded to dozens of them and still only two words are needed.

Kids won’t understand patterns the first few times you do this. They need lots of experiences in order to figure out how patterns work. Once they have the idea,  they can make more complicated patterns. An example of that might be car/car/truck, car/car/truck.

Patterning is a powerful brain strategy. In the article How Learning Patterns Leads to Brighter Children, Matt Powers states: “Out of all mental skills, pattern recognition is said to have the highest correlation with general intelligence.” He explains how patterns also help social skills. Kids use patterning skills to predict behavior and respond to others.

Making patterns with transportation toys is a play activity that gives a turbocharge to thinking. What’s the pattern of play at your house?