For decades and generations, kids have enjoyed playing trains. What’s not to love about a toy based on action and mystery? Many adults love trains too. 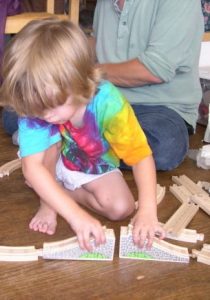 The world is round. Trains go ‘round too. With a train, kids create their own small world. They can control where the train goes, the order of the cars, the placement of the tracks, what goes loaded in the cars and more. Kids are not in control of what happens in their own lives and often feel powerless. Being able to direct the action of the train is empowering for them.

Although there are not as many trains as their used to be, kids still see them. They seem to appear out of nowhere in a drama of noise and speed and then mysteriously disappear. Since kids don’t know where trains go, when they play they get to choose the destinations and solve the mystery for themselves. 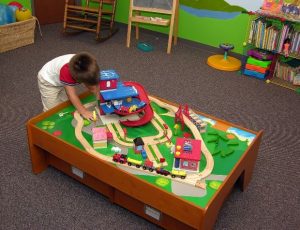 Playing with trains is not passive. Kids have to be actively involved, both on the physical and mental levels. Both large and small muscles are challenged and strengthened. Playing trains is more than hands-on. In setting up the tracks, there are a great deal of problems to be solved, like how to connect the tracks, where to place curves and straight pieces, making sure the train doesn’t run out of tracks, and more. 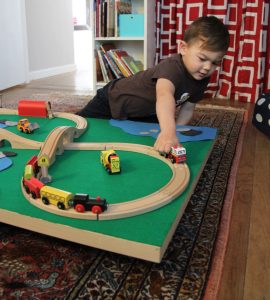 At first, adults help set this up but gradually kids figure this out for themselves. Planning, organizing, concentrating, and problem-solving are only some of the thinking skills and strategies along with creativity and imagining. Train tables are great for play. If space is an issue for your home or center, check out this train table idea from Carla at small + friendly. It rolls under the bed on it’s own wheels. 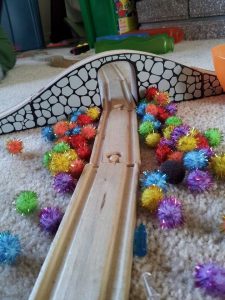 Kids can play with trains on so many different levels. From simply moving the train along the track in cause and effect play to making their own stories and scenarios, there is quite a range. Emotionally, kids learn about handling frustrations as tracks come apart and trains fall over. Creatively, they incorporate their own interests. When children play trains together, they develop social awareness and skills. Language, science, and math are also part of playing trains. Coming aboard for some fun and learning with trains?