The Olympic Games Opening Ceremony can inspire today’s activity: a pretend play parade and performance with music and dancing. Kids can be Team Imagination. 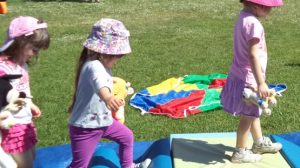 Most kids, little and big, love a parade and what could be better than being in one? Like the athletes, they can march around, wave flags, and cheer. Hopefully, the weather where you live will be nice enough so kids can be outside. Part of the fun is being loud.

The Opening Ceremony has a variety of tremendous performances. Countries showcase their history and culture in music and costumes. The athletes who are part of the competition, will march in teams. Being chosen to carry the country’s flag at the head of the team is an honor. For a parade or performance at home, costumes for kids do not have to be elaborate. Check to see if there are some in the dress-up box, or look through the drawers for some brightly colored scarves, sparkly t-shirts, big hats, and sunglasses.

For music, either choose something fun and catchy or put together some homemade instruments. A saucepan lid and wooden spoon make a great, but noisy, drum. A couple of plastic spoons inside two aluminum pie plates stapled together creates a tambourine. Staple or tape on some colored streamers. Humming into a paper towel roll is like playing a flute or horn. 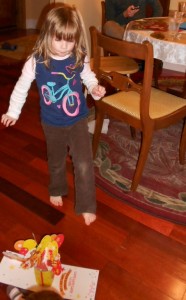 Kids like to showcase what they can do. They might like to show how they can move or dance. Some like to sing songs they know. Although kids are usually clamoring to be the center of attention, it takes self-confidence to perform in front of anyone, even a few family members. When two or more kids get together, they have to watch each other for clues and coordinate what they are doing. While their performance and pretend play parade is not as elaborate as the Opening Ceremony, it’s more important to them. Do you agree imagination and play are worth celebrating too?