Have imagination will travel; hop on with us for a bus pretend play activity for kids. Destination: wherever we want. Adults must be accompanied by kids. 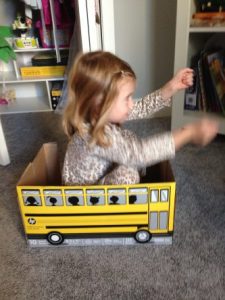 Pretend play happens anytime and anywhere with kids. Plus, they can turn anything into what they need. For bus pretend play, a few chairs are useful and often kids will place them in a line to be the rows on the bus. Whoever is the driver, places hands out in front to steer the imaginary wheel. Likely for back-to-school, photocopy paper came in boxes that looked like buses. Little Sister could hardly wait to get in the box and start playing.

Nearly every time we get in the car, Little Sister wants to sit in the driver’s seat and pretend she’s driving. Especially during the preschool years, young kids don’t feel like they have much power at all. Adults get to say when kids stay home, where they go, and what they do. Kids can express their feelings about the situation—and they often do so loudly—but they don’t have a lot of choice in the matter. It’s no wonder they like to pretend being in charge. Bus drivers do more than steer the bus, they get to say where it’s going and ask people for their ticket or money. School buses don’t have money but they still have drivers.

Bus pretend play can be simple with one child pretending to be the driver and another child or stuffed animal to be the passenger. Some children may make tickets and use bottle caps or other items for money. They will often suggest to whoever is playing with them when it’s time to get on and off. With two or more children, there will likely be a great deal of negotiating and planning. That’s part of the play. Kids can play pretend bus with toys too.

The only action we see might be a lot of wiggling and hand movement as kids vigorously drive their bus. On a brain level, there is a tremendous amount of planning, remembering, and connecting what kids already know to feelings and emotions they imagine are appropriate in the real situation. 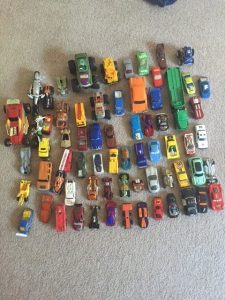 Children as young as two will engage in pretend play. It meets a need for adults too. For the young-at-heart, some actors have been pretending and imagining on stage, in movies, and television for almost a century. After all, with imagination we can go everywhere. Einstein proclaimed it’s more powerful than knowledge.

For a fun and imaginative play-of-the-day, how about some bus pretend play? 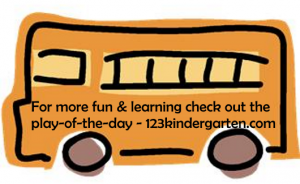