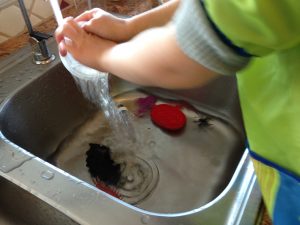 After scooping out a pumpkin, we had to clean up the kitchen. There were a few seeds on the counter and even the floor. There were spoons and other tools that needed washing. Little hands “helped” with that. Some seeds were in the strainer when the dishes were done and I was tempted to throw them up. Little Sister asked if she could use them to make some magic potions. I said yes to that but didn’t want to wipe up the counters again so suggested she make her potions in the kitchen sink. No idea where that thought came from but it was a good one.

Little Sister stood at the sink partly filled with warm water, stirring and creating potions. She used a few Halloween items like a plastic spider, skeleton, centipede, along with a couple of spoons and containers. The jack-o-lantern and bat cookie cutters plus a few seeds and strands floated around too. Two medicine droppers squirted water over the items. This engaged her for several minutes.

The pumpkin that we’d just scooped out also ended up in the sink. Little Sister scooped up and poured out water several times. She carefully picked out and placed the floating seeds into the hollow pumpkin then began filling it with the eye droppers. It took a long time even to get a small amount of water in the pumpkin using the droppers but she was content. 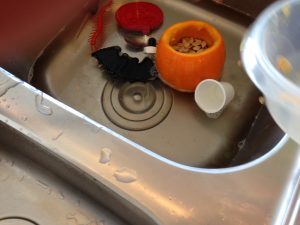 Water is relaxing and calming for kids in the bath, the kitchen sink, or even a big container of it on floor. Expensive toys aren’t needed for play, just a few items of some sort or another. When kids are done, even if some spills on the floor, it is certainly easy to clean up. This play was sensory and most definitely child-directed. We’ve all heard the expression “everything but the kitchen sink.” When it comes to kids, perhaps it could be “the kitchen sink is everything.” The potions weren’t the only magic happening during this Halloween water sensory play, were they?