A Halloween memory game is fun to play, easy to make, and simple to do. Kids and adults can play together and check their memories. 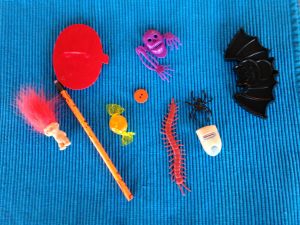 To make the game find about 6 to 10 small Halloween items. Usually, we all have a few things and find more once we’ve started. To make ours we used a skeleton, spider, centipede, bat, pencil, plastic finger, troll with orange hair, pumpkin cookie cutter, orange button, and a candy. I placed these on a tray and we looked at them for a minute. The kids touched them and moved them around. After the timer set for one minute beeped, the items were covered with a dish towel. I asked Little Sister how many of the things she could name. She got five items but she thought for quite a while. Big Sister, who goes to school, named eight. Even though I had rounded up the items, once they were covered I had to really think to get them all.

The kids liked this game and tried it a couple more times. Each time, they remembered some of the same items and some different ones. 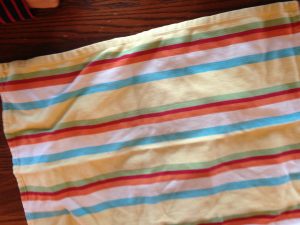 We also played another Halloween memory game with them: What’s missing? This time, when the items were covered up I put my hand under the cloth and took one away. One of the kids got to take off the cloth and the other one tried to figure out what wasn’t there. Using 10 items was pretty hard for Little Sister.  She was able to figure out what was missing when it was the candy. Having one take away the cloth and the other guess kept Big Sister from blurting out the answer. If somebody did say when it wasn’t their turn, that person wasn’t able to take away the cover the next time. This was no great privilege but it worked and was a simple rule.

New research into kids and memory finds that memory” resists being rushed, and all the so-called memory games and drills don’t do a thing for kids….” (Parenting: Developing Your Child’s Memory)The game may not have stretched memory but it did serve a purpose. Playing together was a way of interacting. The kids practiced taking turns, giving others a chance to answer, and being patient while waiting. They got to talk about what they remembered and what they forgot. They shared some strategies. For instance, Big Sister said she was the pencil was missing because she wanted to write with it but it wasn’t sharpened. 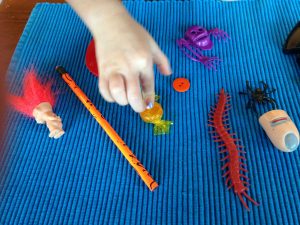 The game may not have helped with remembering the items, but it did help us create the memory of playing together. That’s a good reason to play this Halloween memory game, isn’t it?