Although it sounds terrible to parents and caregivers, messy play contributes to children’s learning and development. It’s a sensory delight for kids and one of the joys of childhood. If play is the brain’s favorite way to learn, messy play is kids favorite way to explore both themselves and the world around them. For this month, blog posts will explore Mayhem and Messy Play. 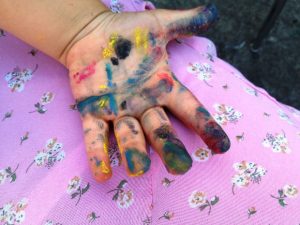 What is Messy Play?

We certainly know what it looks like, but what is messy play? Messy play is an interaction between a child and materials that stimulates one or more senses. It is a hands-on, and sometimes other parts of the body too, immersion into an activity. Kids are making new discoveries about themselves and the world and the result is often a mess. Hence the name: messy play.

Why is Messy Play So Fun?

To begin with, messy play is not something kids have to do right. There is no right or wrong. Kids are free to interact in an endless number of ways.

Kids are not constrained by having to create a product or get a particular result. What they do get is an opportunity to enjoy and discover.

Messy play contributes to children’s learning and development by engaging the senses and the body. Kids might be feeling the texture of dirt or soapy foam, from head to toe. They could be smelling a magic potion made with spices or watching a baking-soda and vinegar volcano. Finding out what kinds of sound they can make banging on pots, pans, cans, and containers, kids are using the sense of hearing. As for taste, cooking is certainly messy, but the play does have to follow directions.

Kids are directing the play and are much more in control of the timetable. They can start and stop as they choose or, perhaps, respond by taking a break and returning later.

An activity may be repeated several times, but messy play isn’t always the same. That’s part of the appeal, what happens could be quite different each time.

Why is Messy Play So Important?

Messy play contributes to children’s learning and development in a variety of ways. Besides the sensory aspect, kids are problem-solving, organizing, linking cause and effect, exercising muscles, developing coordination and motor skills, observing, predicting, and more. They are gathering information about themselves and the world around them. Curiosity asks questions and messy play can reveal answers.

Why does messy play have such a negative reputation? Yes, after making a mess we have to clean up but, in the meantime, we’ve had all the fun of making it. Memories of great messy play activities as kids often stay with us for a lifetime.

Can You Come Play?

Come back to play every day this month for messy play ideas. Is there an opportunity for some messy play for your child today?