Since our cooking in the kitchen is often pretty messy, this kids’ chocolate smoothie messy play wasn’t so different, and the messy was yummy and playful. 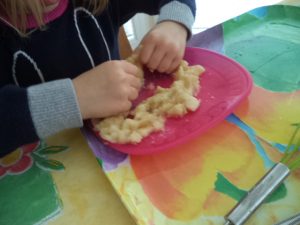 Making bread requires hands to be totally involved in the mixing and kneading so it’s not so far-fetched to have a child be really hands-on when making a smoothie. Of course, to make this one Little Sister did wash her hands well. 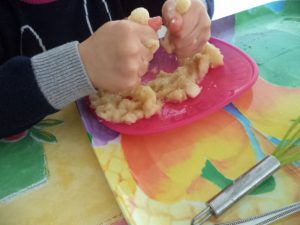 Once kids have washed their hands, have them peel a banana. Place the banana on a freshly cleaned tray or big plastic plate. With fingers, kids squish and smooth the banana until it’s all mushed up, almost like finger paint. Since their hands and the dish are clean, they can smooth the banana around and draw in it if they want. With fingers or spoon, they can also add in some thick, creamy yogurt and mix it in with the banana. Once kids have played sufficiently with this mess, they scoop up the banana yogurt mush and put it in a glass or cup. They may need some help getting the good stuff off the tray. 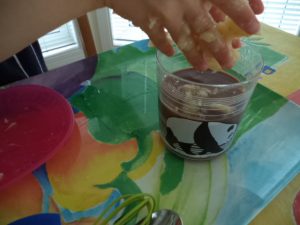 Before going on to the next part, Little Sister wanted to wash her hands because her fingers were so slippery. We poured some chocolate milk into the cup with the banana and yogurt mixture. Using a small whisk, Little Sister stirred it together. It was smooth enough to drink, but not as much fun as slurping it off the whisk. This was a variation on licking-the-beater but fit better in her mouth. 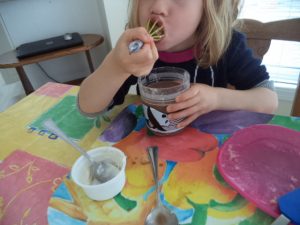 Messy play is often very sensory, and this chocolate smoothie messy play activitywas both. At first, Little Sister liked the feeling of squishing the banana but then wanted to wash it off.  Much like adults do with dough. Food preparation often includes making a mess and cooking with kids helps them develop a positive connection to food and encourages healthy choices. After this, washing up was another sensory experience. Maybe we could say it was de-messy play?