Today’s play-of-the-day is fairy pretend play. The expression, ‘away with the fairies’ means to be day-dreaming or in another world, like pretend play. When children are engaging in imaginative play, they are creating that other world in their mind and sometimes even building it with their toys. 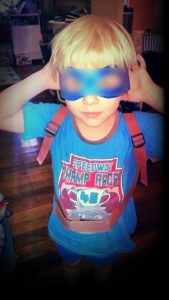 One of the favorite children’s picture books at our house is The Wishing of Bibby Malone by Joy Cowley. A young girl, misunderstood in her family, spends time dancing and singing with the fairies or little people. And wishing. Her family insists she was away two months. After many years of practice and hard work, Biddy’s wishes to be able to sing and dance do come true. Was this because of the fairies or herself?

During pretend play, we see children playing but, like Biddy Malone, they are working hard. Their brains are organizing information, sorting through what children know from their experiences, and linking it to make new combinations. The connections are happening on more than a brain level, as they move their bodies to respond to their thoughts and find the depths of their emotions in their hearts. 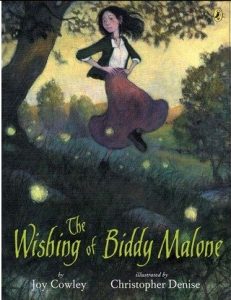 Fairy pretend play doesn’t need much in terms of props. There are many colorful costumes available for girls, and a few for boys, but kids may also put together their own. A simple dress-up for girls is a tutu, but boys’ costumes are often what we think of as gnomes, leprechauns, forest creatures, elves or Peter Pan. This may have more to do with what’s available to them rather than their gender. Fortunately, magical powers, wands, and flying wings are acceptable for both boys and girls.

As an adult, have you ever been advised to “act as if?” That’s a way of tapping into the power of the imagination to achieve a goal. During childhood, we need to encourage pretend play so children can develop their imaginations. “Imagination makes it possible to experience a whole world inside the mind.” (Success Consciousness: The Power of Imagination)

How will imaginative play be part of your child’s day?

You can come ‘away with the fairies’ and play each day on the 123kindergarten blog.