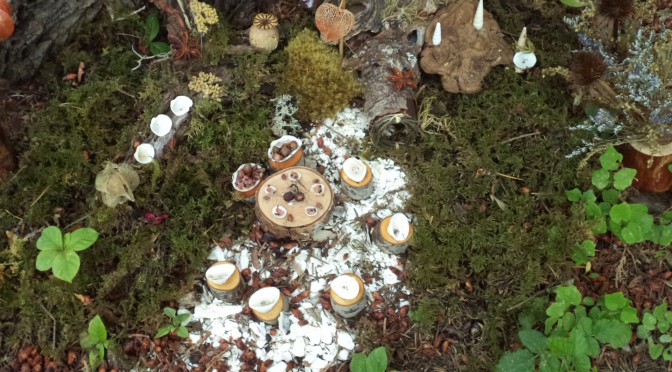 Nature is not just hard reality, it is also imagination; no wonder kids go wild for nature. A favorite event in our area is fairy weekend in the forest. This year there were also beings from outer space making themselves at  home in the trees. 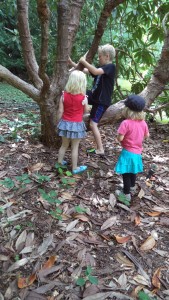 A large, outdoor gardens in our area has many nature celebrations each year. One of the biggest is over two dozen homes for woodland fairies made entirely out of bits of nature. These are tucked into spaces in the forest and have to be discovered by. Adults by themselves on the quest for fairy and other imaginal beings are quite conspicuous. But I was camouflaged by 3 kids.

Fairies do not only appeal to girls. The two girls, each 3 years old, were entranced by the fairy homes but so was a 7-year old boy. He was just as delighted by the woodland creations and mystery. 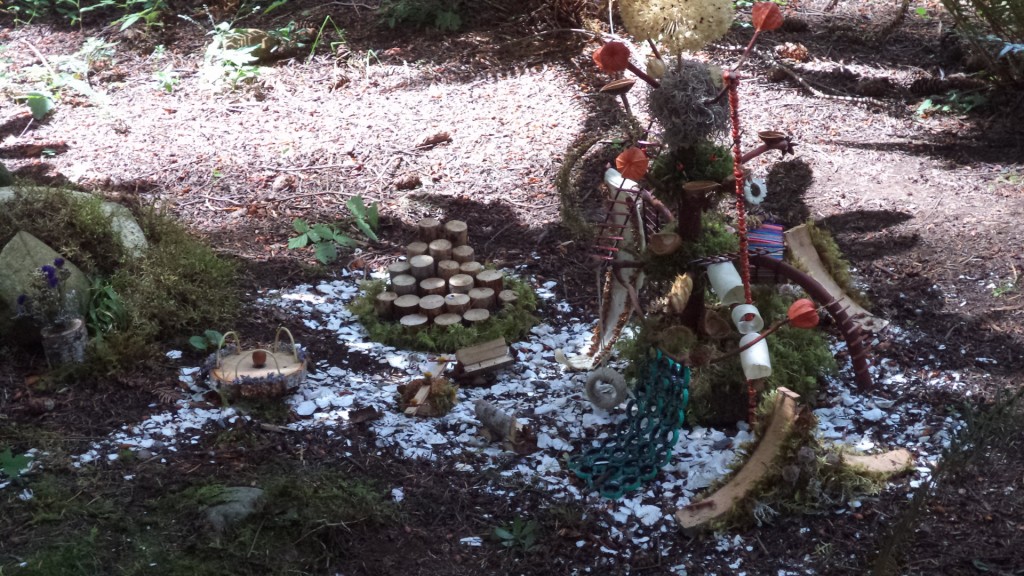 All 3 of them were more drawn to the wood, shells, flowers, and pine cones than the recycled metal of the space creatures. Somehow, the aliens seemed less alive.

Not all cities and towns will have fairies in the parks, but kids can look for evidence of them anywhere. Apparently, fairies like shady spaces and avoid bright sun. During the hot part of the afternoon, they are usually napping. Because they are so tiny and can fly, we only catch glimpses of fairies, like sparkles or shimmers in the air. The best places to look for them are cool, mossy areas often near little pools of water.

Because they are much closer to the ground than adults are, children are much better at finding fairies. They will happily search for fairies when we take them to an area with trees and bushes. Our task is to find and time and space where children can explore both the real and the imagined, where they can play both in and with nature.

Could your go wild for nature include some fairy play?

Have you heard of a pumpkin fairy house before? I hadn’t until recently, but a fairy house is a delightful change from a jack-o-lantern. That’s thinking outside the box, or rather, inside the pumpkin, and encourages creativity and imagination. Jack-o-lanterns do not need to be a face, they can be anything kids can imagine. 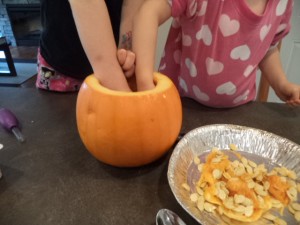 A pumpkin fairy house starts the same way as a jack-o-lantern. First, cut off the top of the pumpkin and then scoop out the inside seeds and strings. (You can save the seeds to roast with a little salt for a tasty Halloween treat or to plant next year.) Adults need to cut a big window out of the pumpkin. Of course, the bigger the pumpkin, the bigger the window and fairy house. Ours wasn’t very large so I cut the window down low. After popping out the window, I wish that I had carved the top of it a little closer to the edge of the circle lid and not left quite such a wide space. Now, comes the fun part, making the house. 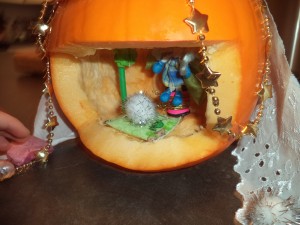 If the weather is not pouring rain like it was for us, kids can go outside and find some colorful leaves or moss to put down for the fairy floor. We looked thru our recycling and craft boxes to find some bits of fabric and handfuls of fluffy cotton balls. Pine cones and tiny berries would be other nature treasures. Fairies like sparkly things so next came some gold-colored plastic necklaces. Water bottle caps turned over made fairy chairs. Kids can use their imaginations to find things that they think fairies would like and a small tea light will light up the inside.

Not all children are particularly interested in fairies, but most kids have small plastic or wood figurines in their toy box. A pumpkin could also be a house for LEGO people, or superheros, or small animals. It could be a barn or a secret hideout just as easily as a fairy house. What kind of pumpkin house would your child like to make?