Kindergarten readiness and creativity are not opposites; creativity is an important strategy for learning and thinking for children of any age. The importance of creativity has recently been recognized in industry and business. In the words of Sir Ken Robinson, “Creativity has become the new literacy.” He strongly believes that we need to nurture the imagination of every child and develop creativity.

Although Lego and Duplo bricks are rectangles and limited because they can’t bend or be squished into other shapes, they can be used in a never ending variety of ways. Kids can build a structure and later use the same blocks to create an entirely new one. Hundreds, even thousands, of children can be given the same blocks and each will make something different. Wheels and people increase the choices for play.

We are not born with a particular amount of creativity and that’s all we get. Like many other strategies, creativity can be influenced. It can be both encouraged and discouraged. Unfortunately, recent research is showing that the level of creativity of children today is less than it was 10 or 20 years ago. We can nurture it by giving children opportunities to explore and to create.

These photos are from a display at our local library. Children were asked to show something about the Olympics. Some of the kids did, but with Lego, an idea can change completely, depending on what the child wishes to express. While the saying goes that “Play is in the child, not the toy,” there is an amazing interaction between kids and Lego that encourages play. What can your child create?

Lego and Duplo can be used for some unique ways to play for fun, learning, and kindergarten readiness all at the same time. There have been lots of posts recently about freezing pieces and they certainly made me wonder, especially who first thought of the idea.

Knowing that a container of liquid could get spilled before we ever got it to the freezer, the best choice was to use ones with lids. These clear ones from the deli section of the store were a good size and didn’t take too long to freeze. They are about the size of a small bowl. We filled them with water not quite to the top. Since the pieces were sitting right at the bottom, there was room for big Duplo pieces.

When the chunks were ready, both Big Sister and Little Sister, each had one. To catch the drips, I used a big tub on the floor. First, they held them until their fingers were cold, then put them down. They slid them back and forth in the tub, but that didn’t help with melting. Big Sister tried blowing on her ice and Little Sister tried to eat it. After a few minutes, I asked what could help melt the ice. Big Sister suggested hot water. She ran some warm water into her deli container, brought it over from the sink, and poured it on the pieces. After 3 or 4 trips, she used an empty plastic bottle which would hold more water.

Both kids played with the pieces of ice in the water, stirring with their hands, lifting them up to check and see if they were smaller, putting them back in, and checking to see how much more was more showing. Because the pieces were right at the surface, there were bits that stuck out from the beginning, but it was still several moments until they came completely out. The play didn’t stop when that happened but continued on for a few more minutes afterwards with just the bits of ice, water, and the Duplo.

What looked like a simple activity involved lots of learning: use of language, stimulation of the sense of touch, concentration, patience, and observation. The end result of getting the piece of Duplo out of the ice was a form of goal-setting. Although each child had a separate chunk of ice, social skills were needed to share the space and the activity. This was definitely fun! Have you tried this with your child?

With tomorrow being Pi day (March 14 is like pi, that is 3.14 the magic number for circles), it seems appropriate to blog about how Lego and Duplo can help young children with early math and kindergarten readiness skills. 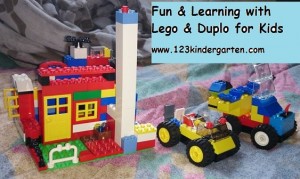 Lego and Duplo are made of mostly squares and rectangles, but there are some wheels. Learning the name of a shape is only a small part. From playing with Lego, kids discover that the squares and rectangles do not roll. For that, wheels are required. But circle shapes do not fit together to make walls and corners. That needs straight lines. This is basic geometry.

Did you know kids also learn something about fractions, before they ever hear the word? Both Duplo and Lego have different sizes of blocks. Two square Duplo bricks are the same as one longer brick. The same for Lego too. Children are learning that pieces can be equal to just 1. That is a foundation for understanding fractions, that parts make a whole. The bricks can be 2 short ones = 1 long one, or it could also be 2 skinny ones = 1 fat one.

Lego and Duplo are also great toys for counting. Grownups can help kids with this part. Again, knowing the names is only part of knowing how to count. Kids need to learn that one number is for one thing. To count 4, there really does need to be 4 blocks. This seems so basic to us, but it’s not for kids. When learning to count even 3 things, kids will point to them over and over and keep saying numbers way beyond 3. They have not yet associated 1 number with 1 item. To help your child with this, you can take your child’s hand and gently touch each block as you say a number. Do not be discouraged when you need to do this the next day, and the next month, over and over. It takes lots of repetition for the brain to understand this 1 number-1 thing connection.

Shapes, fractions, and numbers are only 3 early math skills that kids get to experience as they play with Lego and Duplo. What is the favorite pie at your house?

Lego and Duplo can be considered as a sort of “gym-equipment” for building brain muscles. They help kids develop thinking skills and kindergarten readiness as they play and have fun. Part 1 talked about the strategy of problem-solving; this part will look at decision-making. It’s obvious that problem-solving is an important skill or strategy, but … END_OF_DOCUMENT_TOKEN_TO_BE_REPLACED

Play and work are considered to be opposites, but for children play is serious business; kids play hard and play requires lots of brain power. Making sure kids have time to play is one of the best ways that we can support their learning, development, and kindergarten readiness.  It would be so interesting if these … END_OF_DOCUMENT_TOKEN_TO_BE_REPLACED

Did you know when kids build with Lego and Duplo they are building brain connections as well towers? As kids play with Lego and Duplo, they are learning some complicated concepts and higher thinking skills that will help develop kindergarten readiness. One challenging concept is that of opposites. Some bricks are big and some are … END_OF_DOCUMENT_TOKEN_TO_BE_REPLACED

Lego and Duplo are fun toys for both boys and girls, supporting their early learning and kindergarten readiness in all kinds of ways. Girls, as well as boys, will choose Lego and Duplo for their play. These pictures of Lego creations were made by a boy and girl of the same age. Can you tell … END_OF_DOCUMENT_TOKEN_TO_BE_REPLACED

As kids play with Lego and Duplo, they are learning and developing important brain connections and thinking skills that will help with kindergarten readiness. Did you know that asking kids about colors is often included as part of a school’s evaluation? This gives teachers an idea of a child’s level of thinking skills. Kids who … END_OF_DOCUMENT_TOKEN_TO_BE_REPLACED

The Lego movie captures all of us in the magic of “Let’s pretend”. Charming and delightful, it appeals to the imagination and sense of play. Did you know that pretend play is important for brains? This kind of play is complex and powerful for thinking and learning, and helps children with early development and kindergarten … END_OF_DOCUMENT_TOKEN_TO_BE_REPLACED

Lego is a fun toy for all kinds of play that supports young children’s early learning and kindergarten readiness. Blocks can be used for making different patterns or a repetitive sequence. Patterning is an important thinking skill. SSometimes, when we have to remember a large amount of information, we use the strategy of noticing a … END_OF_DOCUMENT_TOKEN_TO_BE_REPLACED