Kids will be singing a happy tune with these June fun and learning play activities. We all know that PLAY rocks. After all, it’s the brain’s favorite way to learn, so we’ll find ways to play with rocks.

To a child, rocks are a treasure. Lots of times, kids will stop to pick up a rock and hold it tightly for a long time. Pockets will often have a rock or two. Or more, so make sure you check clothes pockets before doing the laundry!

Here’s a start to the month. You can print off the calendar and put it on the fridge to have ideas anytime. Make sure you check back for more June fun and learning play activities for kids! 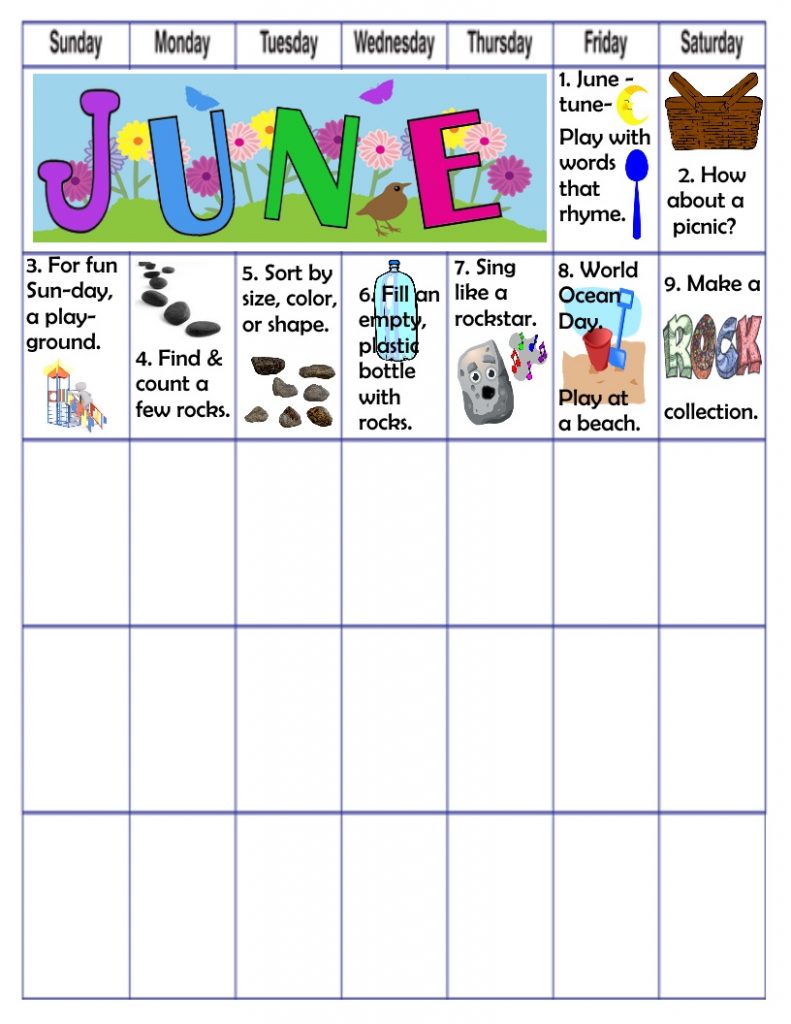 Thankfully, most messy play with rocks happens outside so we don’t worry; Mother Nature takes care of the mess as she invites kids to play and learn. 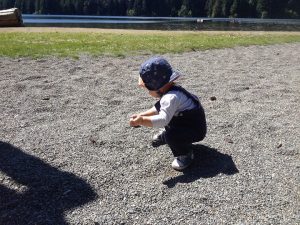 There are two activities that kids love to do over and over with rocks. One of them is to throw rocks, especially in water, be it a puddle, a lake, a river, or an ocean. This is highly sensory: the weight of the rock in the hand, the breeze on the skin when throwing, watching the rock as it arcs toward the water, and, at last, the sound of the kerplunk or splash. The messy part happens as kids gradually move closer to the water and then end up in it, or, just get covered with dirt as they dig up rocks to throw. 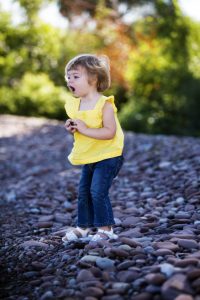 Speaking of digging, that’s the second activity that never seems to lose its appeal. Kids will spend hours digging up rocks and dumping them. They may use their hands, shovels, or wheeled toys.

As we watch them, we wonder why this engages them so intently, but there’s just as much action happening we can’t see. Kids are exploring cause and effect. While this is no mystery to us, it’s still pretty exciting to kids. Just imagine, each time they tip the shovel or the dump truck, the rocks slide off. 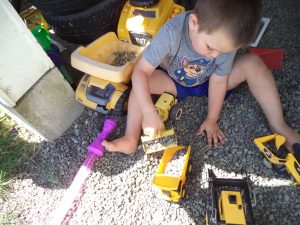 Rocks are fun just to dig up, carry around, and pile up somewhere else. Kids are making an impact on their environment, actively creating instead of passively experiencing. They can feel, see, and hear the evidence of their own power. 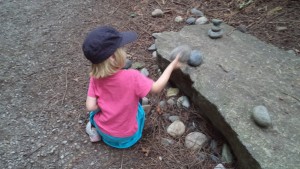 Collecting rocks is a way to organize messy play with rocks. For young children, putting one or more rocks in each space of an egg carton can be enough. Filling an empty water bottle is another way to gather and keep rocks. 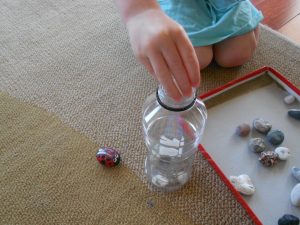 Before rocks come in the house, kids can wash them in warm soapy water and let them dry in the sun. When rocks are wet it’s so much easier to see all the lines, shapes, and different colors. Once rocks are dry, kids may enjoy painting on rocks for another kind of messy rock play. 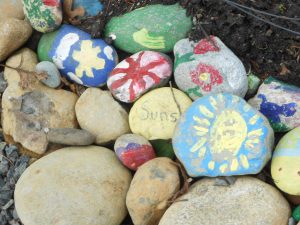 Might any of these ideas appeal to your child for a play-of-the-day that rocks?  Check out how grownups play with rocks: 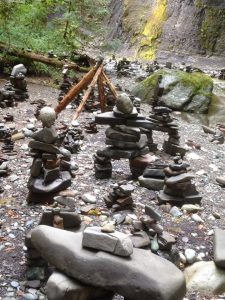 P.S. Come back to the blog tomorrow for more messy play ideas!

Space activities do not have to be elaborate to be fun for kids. This moon rocks bottle activity was engaging and simple, full of learning and play. It appeals to any child who likes rocks, and that’s most, if not all of them.

Finding a pile of small rocks is usually easy. Rocks have a sort of magnetic or magic attraction for kids. They’ll know where to find some. Besides some rocks, kids need an empty water bottle with a wide mouth. Once kids, rocks, and water bottle are all in the same place, it’s time to count down, blast off, and journey to the moon. When they have landed, they start filling the water bottle with the moon rocks. 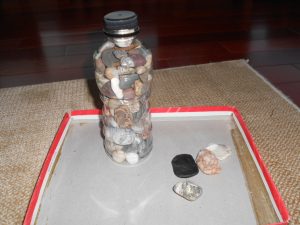 Yes, that’s it. That’s the play-of-the-day. While a grownup could fill up the bottle in just a minute or two, a child picks up each rock one-by-one and checks it out. It’s as if each rock has a story and kids want to hear it. Kids look for lines, swirls, spots, curves, edges, and other markings on rocks. Little Sister spent quite a long time filling her bottle with moon rocks.

This moon rocks bottle activity may not seem like much, but there’s a lot to it. For example,

These are some of the ways kids learn as they play. Would your child enjoy this moon rocks bottle activity?

Child’s play with rocks starts almost as soon as little ones can pick them up and may last a lifetime. They are not a toy, but definitely great for play. A small rock is just the right size for a child’s hand. When it gets warm, kids find a rock comforting to hold. Available in … END_OF_DOCUMENT_TOKEN_TO_BE_REPLACED

Rocks are like nature’s gift to kids. Just right for little hands that find and pick them up anywhere, there’s very special nature play with rocks. While adults have pockets for keys and cell phones, kids have pockets for rocks. Do rocks send out signals that only kids can hear? Rocks hold a special fascination … END_OF_DOCUMENT_TOKEN_TO_BE_REPLACED

Science Activities That Rock Does science play happen at your house? Many parents are unsure about doing science with kids but it can be as easy and simple as science fun with rocks. Kids are fascinated with rocks and rock-hounds can be any age. We have to watch that little ones don’t put rocks in … END_OF_DOCUMENT_TOKEN_TO_BE_REPLACED