This time of year, farmers’ markets have wonderful vegetables and fruits and many areas have Fall Fairs. We used some ordinary and unusual ones in an at-home fall fair and simple science experiment. Have you ever heard of a yellow carrot? Or, a purple one? How about orange and purple tomatoes? We tried some and had a taste-test. Of course, which one tastes better depends on each person’s likes, but it’s a simple question and requires kids to compare. 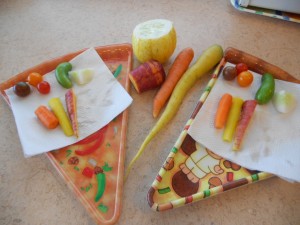 For this experiment, we started with 3 colors of carrots: orange, yellow, and purple. Big Sister liked the purple ones because they were 2 colors, purple on the outside and orange on the inside. Little Sister liked the green ones, which were mini-cucumbers.

So we tried the cucumbers next, the minis and the round lemon cucumbers. Both kids liked the baby green ones. The lemon ones were very nice, but I thought they might have a lemon flavor. I guess they are called lemon cukes because of their round shape and color, not taste. Then we tried the tomatoes: red, orange, and purple. The girls liked the small ones, and I thought the orange ones were sweeter.

Comparing is an important thinking skill. It helps organize familiar and new information. When we compare, we look for what is the same and what is different about 2 or more things. This activity added another step, and the items were judged in relation to each other. Ordinary words are used in a special way when comparing, big becomes bigger, etc. At just 3 years old, Little Sister wasn’t at the same level of thinking as Big Sister who is now 6. But learning is a process, and we had fun.

A Fall Fair is comparing on a really big scale. You can set up one right at home and have some fun and learning with your child. Could a Fall Fair be your play-of-the-day?