Each community will have special summer activities for kids; usually these combine fun and learning and will also help develop kindergarten readiness. Because we live in area that rains a lot, there are some lovely parks and gardens. Just recently, one of them offered a magical weekend with 30 fairy houses tucked in the trees and flowers. Despite the rain, many families with children, enjoyed time in the park looking eagerly for a glimpse of fairies or, at least, their homes. 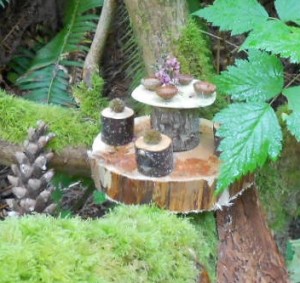 The fairy homes were constructed of natural materials such as rocks, twigs, flowers, sea shells, tree bark, vines, grasses and pinecones. The staff at the gardens must have stretched their imaginations to create such delightful fairy houses. The children’s imaginations were captured too, and many of them wore fairy costumes. One little girl, not quite two years old, bent down and knocked at a small fairy door in a tree. While we think of imagination as play, brains are working and making new pathways and connections. 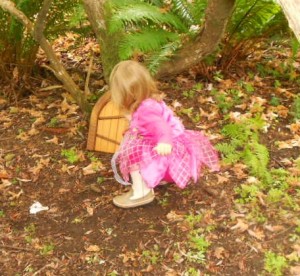 Imagination also helps children understand the real world, not just a fantasy one. For instance, when we try and explain to a child that running out into the street can be dangerous, we are asking the child to imagine what might happen and why it`s important to look and be careful. Imagination also helps for relating to others. How often do we ask a child after an incident something like “How would you feel if someone did that to you?” The child needs to be able to imagine those feelings. In order to follow along and understand a story that we are reading to them, kids need to use their imaginations.

This summer, a facility in your area.may have an event that appeals to children’s imaginations. The fun supports the development of imagination as a thinking skill and part of kindergarten readiness. For a play-of-the-day, might your child like to make a house for fairies and imagination?