Real pirates were often successful at what they were doing because they could see the patterns and patterning is an important skill for children’s learning and kindergarten readiness. Pirates could see the patterns in the tides, the waves, and certainly the transporting of treasure. They were quick to use patterns to their advantage. We certainly don’t want our kids to take after pirates but playing and having fun with patterns gives kids an advantage too. 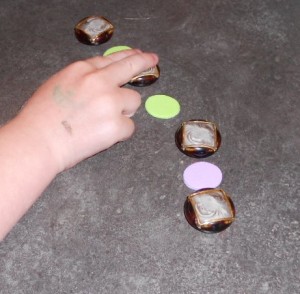 Patterns are items that are repeated in the same way. One benefit of patterns is that they reduce the amount of information that brains need to process. Information is often in such big quantities that it is overwhelming. Adults talk about information-overload and kids feel that too. A pattern condenses that information. Patterns follow the same steps and sequences making it easier to predict what will happen next and be prepared for it. Language follows a pattern. Crawling, walking, and running all use a left-right, left-right alternating pattern. Their are patterns such as day-night, day-night for everyone in the whole world!

Children need lots of experiences with patterns before they understand. To make some pirate patterns we gathered up some items that were round, such as buttons and foam shapes. Using just two kinds of pirate treasure, Big Sister was able to make a simple pattern of button-treasure and foam circles: button-foam, button-foam, button-foam. These “ruby and diamond” rocks are also in a pattern. Little Sister just played with the buttons, turning them over and setting them out at random.

Little pirates may want to go exploring for patterns. They might be some in the house in tiles, flooring, towels, curtains, dishes, etc. Clothes, especially t-shirts often have patterns in stripes. Outside, there are patterns in sidewalks, buildings, and yards. Pointing out patterns and talking about them every now and then will help your child build an awareness of patterns. What are some pattern treasures you and your child can find and make?