Sometimes, ideas for fun, learning, and kindergarten readiness find me. Two days in a row the Goggle Doodle has inspired an idea for kids and play. Yesterday’s post was about the incredible Human Computer, Shakuntala Devi. From her book, Mathability and message that math ability depends on attitude, came some activities about counting, numbers and math ideas. Today’s inspiration is the designer Raymond Loewy.

The name Raymond Loewy might not be familiar, but some of his designs certainly are, such as the shell and Exxon logos. Aircraft, trains, cars, buses, washing machines, refrigerators, duplicating machines, and Coca-Cola containers were some of his work. But this wasn’t just work that he did once he’d finished school. It was also his play! While some information says that Loewy’s career began with the design for a duplicating machine, it began much earlier, with a toy. At the age of 15, he won a prize for his design of a toy model airplane, which began selling the next year. He explained, “As a boy I had liked…drawing….”

Play is how children learn. It is hands-on, creative, and imaginative. Kids discover and explore as they play. Drawing is a play activity. While the body is drawing pictures on paper, the brain is making pictures in the mind. Children exercise the small muscles in their hands, fingers, wrists, and arms. They also develop thinking skills. 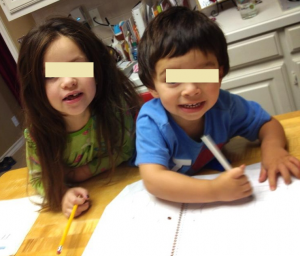 For a play-of-the-day today, set out some pencils, chalk, crayons, or markers, whatever is appropriate for the age of your child, along with something to draw on, like a chalkboard, paper, or cardboard box. Some children are eager to draw and cover every bit of paper they find at home. Others are hesitant or not really interested. To encourage them, think of something that interests them. Dinosaurs and monsters are quite motivating, especially monsters because they are so much easier to draw! Drawing on a screen is an option as long as there is drawing with real materials too. What does your child like to draw?