When we think of young children’s play, it’s not a big leap to see how that can be part of kindergarten readiness, but it is stretch to seeing how that can influence career choices. From doing this series, I’ll confess that I’ve been surprised. So far, posts have been on a mathematician who played with numbers and a design engineer who liked drawing. Taking her toys apart was how a scientist played, and creating items was how a craft business started. A nurse played with Dr. Barbie and a chef wanted an Easy-Bake oven, despite his father’s concern for a more gender-appropriate toy like a GI Joe. 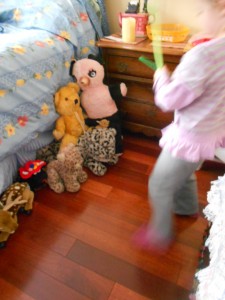 Michael Bublé sang at a concert earlier this week. An award winning singer, he said at an Oprah interview that, as early as two years old, he dreamed of being a famous singer. His interest in jazz music came later, about five years old. As he grew up, he listened to his grandfather’s collection of jazz records. The two of them also share a love of hockey.

Including music experiences is important for all children. Listening to music stimulates brain connections and forms pathways for learning in language, math, and science. Music influences emotion and well-being. Think of how soothing music can be for all of us. Music has rhythm, and so do heartbeats and breathing.

For an activity today, enjoy some songs and singing. While we might think that kids are mostly interested in children’s entertainers, they also love other forms. The classic piece Danse Macabre was a favorite here before Halloween. This YouTube video shows a little boy, almost 3 years old, who likes to sing opera! Perhaps you have some music from different countries. Kids love to respond to music by dancing and moving, and they also like to make their own music and sing their own songs. Can your day include some music fun and learning for your child?