Putting together a sensory bin for your child can be intimidating! There are some amazing ones on the internet that, by comparison, make me green with envy and red with embarrassment. But, the idea of a sensory bin is to put some simple items together that invite kids to play. Remember, kids will play with anything. With that in mind, I was able to find some things that the kids liked, plus I had fun making a bin. 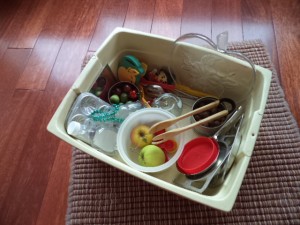 Many sensory bins will use something small like rice, lentils, oats, garbanzo beans, pasta, or wooden beads for kids to measure and pour, sort of an alternative to sand. Another day, I may add something like that but to start, there were some small metal baking dishes, plastic utensils such as spoons, flippers, and spatulas, a container of clay pellets left over from some plant pots, beads,  plastic jars, bamboo tongs, various sizes of plastic jar lids in red, yellow, and green, an apple paper weight,  small wooden apples, and two real ones.

Both kids are beyond the everything in the mouth stage, so some of the objects were quite small. Big Sister used the things in the bin for lots of imaginative play, making things to eat, pretending she worked in a bakery where she made goodies that she sold to Little Sister. Little Sister had a very different sort of play, putting the small objects in the container and stirring or pouring them. She carefully put the string of beads into the skinny jars then tried to pour it out. She made a few attempts to get them out, then put the jar aside and played with something different. Both of them spent several minutes with the one pair of tongs, picking up the small wooden apples. Since there was only one pair, they had to negotiate who would get them, which they did, more or less.

Children will play with objects in their own way. Some children may only spend a few minutes with a sensory bin the first time, going back to it often throughout the day. Others will find many different ways to play and be fascinated for a long time. This will depend on their needs and moods. However they play, they will be having fun and learning at the same time. Have you tried some sensory bins for your child?