Exploring the sense of touch is fun for kids and influences their physical, mental, and emotional health. Our sense of touch develops before all other senses and is amazingly sensitive. The skin over our entire bodies will react to touch so It is a primary channel for receiving information about the world. We did 3 fall activities for sense of touch. 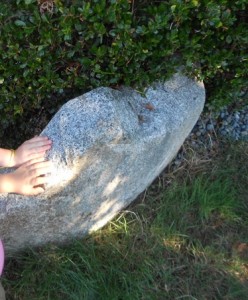 First, we went outside to take a touch and feel walk. We talked beforehand about being careful with touching, especially because kids really want to touch everything. Some safe things were: bark, pine cones, rocks, trees, apples, sticks, and the grass. Blackberry bushes were definitely not safe for touching. They were look only. 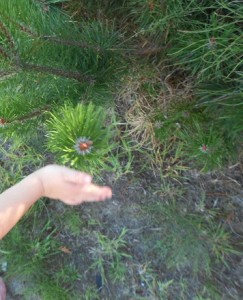 Big Sister noticed a cocoon that she wanted to touch, but it was on the side of a small cactus in a pot on the front sidewalk, so it was another look only. We talked about how some things were rough and others were smooth, some were dry and some were wet. Some of the rocks in the sun were almost warm. We could tell by looking if something would feel rough or smooth, but not cold or hot.

We brought some items home and put them on a tray. Then, we covered them with a dish towel. The kids put their hands underneath, felt something, and then guessed what it was, just by the feel. They really enjoyed both the feeling and the guessing and this was a simple play activity.

The most fun for sense of touch in the fall was definitely the piles of leaves. Their hands touched the leaves, threw them, and tried to catch them as they swirled back down. Their bodies got to jump in the leaves and roll around. Then we all got to touch the rake and rake the leaves back into piles.

Can you suggest anything else for exploring the sense of touch in the fall?