Did you know that children’s imaginations are taking a more than 60-million-year leap when they play with dinosaurs? November is a special month to encourage pretend play because it’s Dinovember! Dinovember began with parents Refe and Susan Tuma who wanted to preserve the wonder of childhood for just a little longer for their children, so in their house, the dinosaurs come alive at night and have adventures. 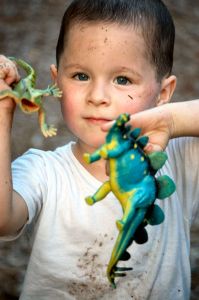 As young children engage in pretend play, their dinosaur toys are alive, especially alive with possibilities. Imagination is a tremendously powerful tool of the mind. In the words of Carl Sagan, “Imagination will often carry us to worlds that never were, but without it we go nowhere.” In their play, kids and dinosaurs can go anywhere.

Did you know when children pretend, even though the action is only taking part in their brains, that their bodies respond? When children pretend they are going up in an elevator all the way to clouds in the sky, their eyes go up. When they pretend they are flying the muscles in the arms move. Not only is their action in bodies, but in brains too that are forming new pathways and connections.

We do not think of imagining as a skill but kids need time and opportunities to develop it. A few plastic dinosaurs can invite all kinds of pretend play. Usually, kids will create their own story-lines, but if the ‘dinosaurs’ only want to eat each other up, you can suggest they go on an adventure, such as camping. This gives a child a new direction for play and imagining. Dinosaurs might also like to play with or in something.

Pretend play is not just part of the imaginary world, it also helps kids with reality. Often, as parents we ask a child something like “What might happen if you just run without looking?” We are asking the child to imagine what could happen so s/he does not behave in certain ways.  Also, when we ask children how they might feel if someone wouldn’t let them play with a toy they wanted, we are expecting them to use their imaginations. Imagination and pretending are tools kids need for safety and relating to others.

Dinosaurs may have disappeared from the real world, but they are alive and well in play. How does your child imagine and pretend with dinosaurs?