This same craft idea can be used for either a turkey or a dinosaur, which is quite appropriate because it turns out turkeys and dinosaurs are related. After yesterday’s blog post about dinosaurs, manners, magic words, and the holiday of Thanksgiving, a quick on-line search showed there’s evidence of a link between dinosaurs and turkeys. Not only are birds the closest living relatives of dinosaurs, the huge Tyrannosaurus Rex and turkeys both have a wishbone. 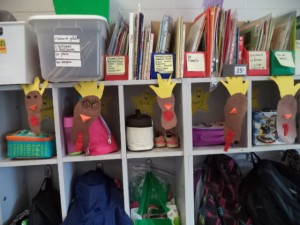 To  make a turkey, help your child trace around either the right or left foot on a piece of brown paper. It’s easier to leave a sock or shoe on, but be careful not to use a felt marker. It will stain. A dark crayon is better. Sometimes, little hands need help cutting around the shape. That’s the head of the turkey. For the turkey feathers, use yellow or orange paper. Kids spread the fingers of one hand apart while a helping hand traces it. This is even trickier to cut out, but little hands can glue the hand on the top of the brown foot. Attach an orange triangle for the beak and some red tissue paper beside or underneath. Kids can draw on two eyes. 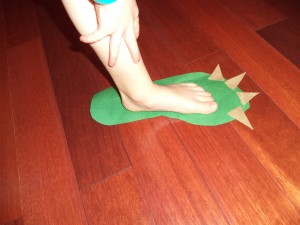 For the dinosaur, the first step is the same. Help your child trace around either the right or left foot on a piece of green paper. Once this is cut out, kids can glue on some brown triangles for the claws. One foot but two different crafts or kids can make a turkey with one foot and a dinosaur with the other. To make a bigger foot for the dinosaur, kids can trace around the foot or shoe of a grownup. That’s even better for the dinosaur.

Isn’t it good that turkeys aren’t extinct? What we do at Thanksgiving and Christmas without turkeys? How big is a dinosaur wishbone? How much stuffing would a dinosaur need?