Science kits for kids don’t contain a pail and shovel but these are super tools for some fun and learning in science play with sand and dirt. Spoons, containers, shapes, strainers, sieves, wheels, sticks, and other bits and pieces can be used instead of pails and shovels.  While there are a few differences between sand and dirt, it’s all the same in the wash. (chuckle, chuckle) 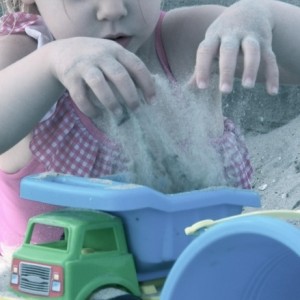 During sand or dirt play, kids are making all sorts of connections. They see how it pours and clumps, feel how light is on a shovel or spoon, and how heavy it is in a pail, They watch the sand and dirt pile up higher and higher but the sides remain sloped, like a small mountain, unless there is a bit of water. Water makes them behave very differently. 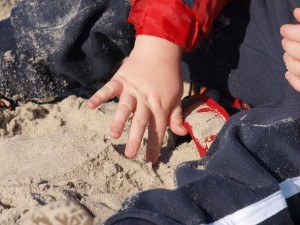 Children use their senses. Even though the sand or dirt is a single color, eyes like to get right up close. Fingers and whole bodies like to feel. Sand and dirt don’t make loud noises when poured and scooped but there’s a satisfactory sound. Most kids only taste it a few times and the smells can be barely there.

As children play, they are figuring out other concepts too, like cause and effect.  What happens when sand is poured in a container with holes? Testing is done over and over: Will sand stay in a pail shape when turned upside down? Kids experiment on  their own.

Often parents and caregivers are very hesitant about science play but it can be as natural as playing with the dirt. When appropriate, we can invite kids to tell us about what they are doing. We can ask them what they think might happen as they play and explore. No matter how many times the water washes away a sand castle, it’s still fun to play in sand some more. Does your child enjoy science play with sand and dirt?