Seeing all these great ideas on-line might tempt you to do more, when maybe what’s needed is to do less. Here are some simple Christmas games for kids with no fuss: 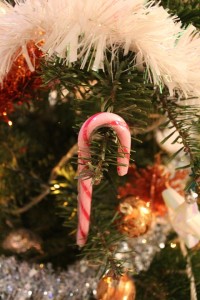 When you are waiting in line at the bank, the store, the post office, or even right at home, I SPY is a simple idea that gives kids and caregivers something to do. One person starts and chooses an object that is fairly obvious then gives clues. For instance, you might see a candy cane and say, “I see something white with red stripes.”  Kids then get to look around and see if they can pick out the object you mean. Depending on the age of  your child, you might need to give more clues or make your clues and objects more challenging. After you have a turn, your child gets to choose something and give clues. 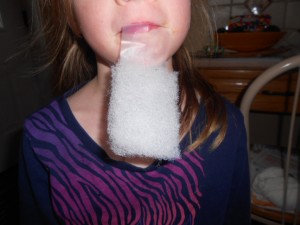 This is a variation of the game Simon Says, but in this case it’s Santa that gives the instructions. Beard optional. Santa Says jump up and down and wave  your arms. Or he might say to get down on all fours like a reindeer. He could even tell kids to build a snowman. Make sure each instruction starts with the words Santa Says. If an instruction doesn’t start with those 2 words then the players don’t do it. If they do, they are “out”.  To keep the game moving, after one person is “out” a new Santa can give instructions. To keep kids moving, Santa can say things like “Santa Says go touch something red.” That way kids are moving around.   Santa can also tuck in helpful ones like “Santa Says to pick up 5 toys and put them in the toybox.” 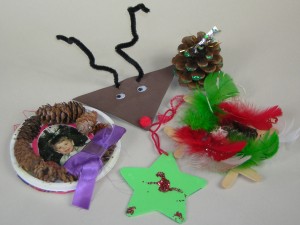 Find a few items and put them on a tray or in a group on a table. Let your child look at them and then cover them up with a cloth like a tea towel. How many of them can your child remember? Another way to play is to take one of the items away while your child closes eyes briefly. Lift up the cloth and your child gets to look and figure out what’s missing. If this is too easy, add a few more items.

Rudolph is of course the leader and he leads the rest of the team, This is a great game for outside. It can be played inside, but the reindeer have to go slower and be more careful or just do actions that are safe for a small space.

These simple Christmas games for kids are still fun. Can you just play too?