Star Wars memory game to the rescue. Instead of some weekend time for outside fun, we needed a quiet game that could be played from the sofa. Our plans had to be revised for sick kids. Big Sister is curled up under a blanket, bucket close by just in case, and Little Sister is sipping honey and ginger because her “throat keeps getting blocked.”

While the chance to catch up on the laundry and tidy the kitchen is welcome, with the kids quietly watching TV, it will absolutely not be on all day. Sitting down to read stories will happen a few times along with some other quiet activities for distraction. 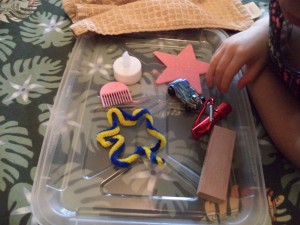 To make and play this Star Wars memory game, it would be ideal to have a few Star Wars plastic characters. We made do with some stars and Little Sister chose 7 items to put on a tray. Ours were: a glow-in-the-dark star, a pipe cleaner star, a tiny light saber or key chain flashlight, a fake candle or tea light, a toy comb with a star on it, a tiny car with blue flames, and a Jenga block. That was Big Sister’s choice because Jenga sounds sort of like Jedi.

The kids each took a turn looking at the items on the tray. I draped a cloth over them and they tried to remember the items. Big Sister remembered 5 and Little Sister got 3. I was relieved when I did name all 7.

A different way to play is to take one item away under cover of the towel or cloth. Take the towel away and the other person gets to say what’s missing. Little Sister was able to figure out what was removed about half the time, Big Sister wasn’t ever stumped, but she is almost 3 years older.

Another variation is to add an item, again using the towel to hide the action. This was easy because the new item was quite obvious.

This Star Wars memory game was fun and provided a break when needed. It can be done with any items that are handy at your house. Is your memory as good as kids’?