Children’s play counts when it comes to early learning and development so an idea for a play-of-the-day is Star Wars math  counting and patterning. 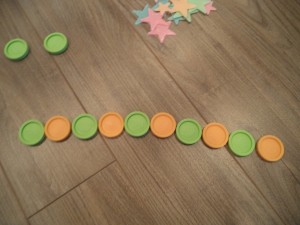 Not having Star Wars characters and toys isn’t even a problem. We have a few but not enough to count—pardon the pun—so instead we used some glow-in-the-dark stars that came from a dollar store. We needed something else so borrowed the round plastic pieces from a checkerboard game to be planets. Planets are certainly part of Star Wars.

Whatever you use, there are lots of ways that kids can count, such as all one color, or all of one kind. The important part is to touch each item as the number is said. Saying the numbers accurately comes with lots of repetition but this isn’t all there is to counting. To understand counting, kids need to figure out that each object goes with a number. As we count, each number means one more thing. Developing this number sense also needs practice as well as hands-on time. Lots and lots of hands on opportunities. As in countless…chuckle, chuckle. 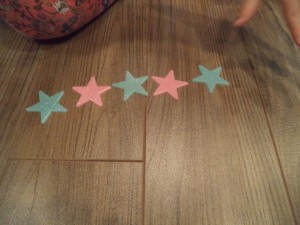 Patterning is also a critical math skill. For that matter, it’s more than that, it’s a critical thinking skill. Information bombards the brain in vast quantities and finding a pattern reduces it into a smaller amount. We made some simple patterns star/planet, star/planet and blue star/pink star, blue star/pink star. Little Sister made another of her own, 2 blue stars/2 pink stars, 2 blue stars/2 pink stars.

After that, she wanted to use the planets and stars as money and play that way. More Star Wars math counting and patterning and now money. Such play will help children develop familiarity with math. Math anxiety is all too common, even in the early grades. If kids have been able to play with math, they are confident and eager.

Will your child’s play today count?