Did you know at school 1 in 4 children is burdened with math anxiety? Children’s play builds math confidence instead of anxiety which can last for a lifetime. 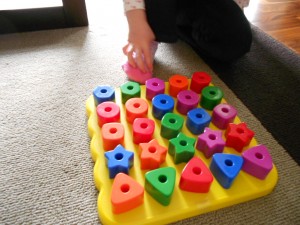 When it comes to math, such as dividing a recipe in half, checking the utility bill, or measuring a board before cutting, are you comfortable? For many adults this is a nightmare and the roots of the fear come from long before they started school. Trying to figure out which way to go when suddenly faced with numbers is like trying to navigate in a new country. For kids that haven’t seen, touched, and played with numbers before school no wonder they feel fearful and anxious. On the other hand, kids that have math play experiences greet numbers and math ideas like old, familiar friends.

As parents and caregivers, they are countless ways to encourage math play. Here are a few:

The expression to “steal a march on someone” means to have an advantage. Ordinary experiences will give your child a powerful advantage and play builds math confidence. How many ways can your child play with math today?

Kids can be friends with math? While this sounds impossible, it’s critical because 1 in 4 of us, kids too, suffer with math anxiety. Make friends with PLAY. 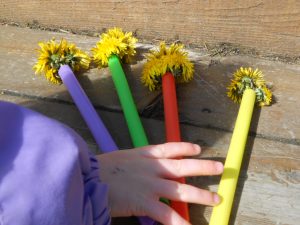 A simple and very affordable math toy is foam or magnet numbers. Kids can hold them, sort them, put them in baskets, and make them into a train. As kids are hands-on with numbers, the brain is eyes-on. It’s figuring out the lines and shapes of numbers and getting up close and familiar with how they look. Occasionally saying the numbers gets the brain ears-on too. 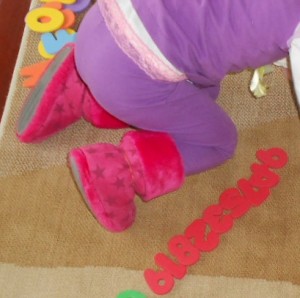 Foam and magnetic numbers can also be used to make groups, maybe using colors. Sorting is a basic math idea and any items can be used for this, not just toys. Kids can sort the knives, spoons, and forks into their groups when helping unload the dishwasher. That’s math. 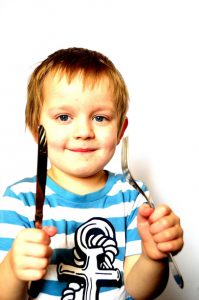 Another basic idea is one-to-one matching. Besides getting the number-words in the right order, part of counting is figuring out that one object goes with one number. Each time we say a number we need one more thing. One foot needs one shoe, two feet need two shoes. One button goes in each buttonhole. Getting dressed is a great time for everyday math. Setting the table or putting one apple in each space in a muffin tin is more math play. 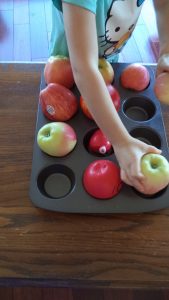 Looking for and making patterns can be fun. Kids can use anything to make patterns from toys to socks, or blocks to markers. Our ears listen for patterns in music and eyes look for them all around. 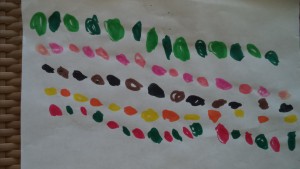 Math isn’t just numbers, it’s also words, like more, less, bigger, smaller, longer, higher, slow, fast, and nothing. These words can be tricky to use too. The mathbox car is smaller than the toy bulldozer, but that’s smaller than a real one.  Running is faster than walking, but it might be too slow when trying to catch the bus. 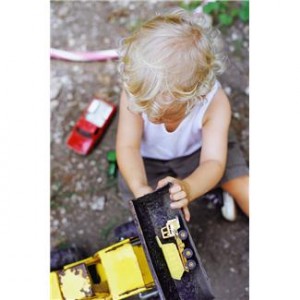 There are countless ways to use ordinary, everyday activities and play so kids can be friends with math and numbers. What kids of math play happens at your house or care center?

Can you make the days count with the new year’s resolution to include some kids number play? How can we do this–let me count the ways. 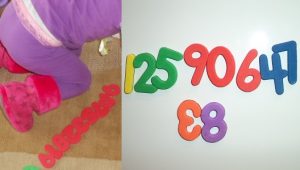 Every day there are countless ways to include kids number play. From getting dressed in clothes with numbers, counting steps to the bus, looking for numbers, telling kids they have 2 more minutes, asking them to try 3 more bites of veggies before dessert, cutting a treat in half, one plate for each person on the table, and alternating turns are all examples of numbers and math in a day. So ordinary.

If numbers and math are so much a part of every day, why then do so many people fear them? Math anxiety is so common it affects 1 in 4 people, kids too. Have you every been overwhelmed by math or terrified of having to figure out a math problem? Something so common, and so needed, shouldn’t be scary. Like the big X on a test, this is wrong. For the sake of our kids and their future, we need to do whatever we can for them to feel comfortable and confident when it comes to math. Kids need to be so familiar with seeing and hearing numbers when they get to school and work with numbers, they greet them like old, familiar friends.

Math is like the chameleon that changes colors. It can be as comfy as favorite, worn out slippers or as exciting and adventurous as the count down on a spaceship. So how do we get kids to like numbers and math? The answer comes in a word: PLAY.

Here are some inspirations. Pick up a package of numbers to play with on the floor or fridge. These are often available at dollar or thrift stores. Get out the play-dough and let your child roll out the numbers of your house or apartment. Draw out a hopscotch on the sidewalk and let your child feel the numbers from toe to head. Count toes and fingers. To turn a frown into a smile at wake-up time, coax a foot from under the covers. Count your child’s toes and pretend there is one missing. Look for it all over, in the bed, under the pillow, mixed up in the blankets, and ‘find’ it. The missing toe is your thumb peeking out between two fingers. Put the ‘toe’ back in place and heave a sigh of relief. 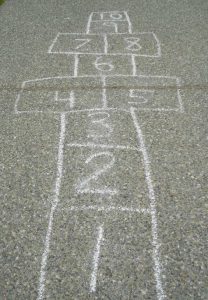 Find your own ways to play with numbers and math. If you could super-charge your child’s future with some simple, easy, everyday play would you? Think of ways math and number fear hold you back. Ease and confidence with numbers are gifts you can give your child every day. Childhood days are numbered so can you make each day count with kids number play?

Kids would love to do math if we made sure such great activities as gingerbread house decorating were included. This is sure sweet and tasty math play. How can decorating a gingerbread house be math? Math is not just numbers, but shapes too. Check out the shapes of the wall and roof. The top of the … END_OF_DOCUMENT_TOKEN_TO_BE_REPLACED

Have you heard the expression it’s the little things that count? It’s also the simple things, like one-to-one matching for some dragon math fun. Sometimes, this is also called one-to-one correspondence. Surprisingly, math includes relationships. For this activity, we used some small plastic dragons along with some dinosaur friends. We had a container of treasure … END_OF_DOCUMENT_TOKEN_TO_BE_REPLACED

For some fun today, how about making dragon patterns? Usually, dragons are covered in scales and these scales have a pattern. Treasure has patterns too. There are lots of ideas for pattern fun. Little Sister wanted to make patterns with treasure. We rounded up some bottle caps, buttons, and flat glass marbles to be the … END_OF_DOCUMENT_TOKEN_TO_BE_REPLACED

Counting dragon treasure doesn’t need to take long, unless you’re a dragon. But even if kids only spend a few minutes, that adds to the experience pile. And tonight on tv we’ve certainly watched the drama of counting and numbers. Dragons collect all sorts of treasures. Since they are imaginary creatures that could be practically … END_OF_DOCUMENT_TOKEN_TO_BE_REPLACED

Math fun with transportation toys is easy and makes math relevant. Kids develop familiarity and confidence when they experience math as part of play. Children often play with cars and trucks by zooming them. This can be math. Cars go fast, but one will go faster. This is a comparison. Young toddlers may not use … END_OF_DOCUMENT_TOKEN_TO_BE_REPLACED

What’s a little Pi between friends? Or cake? Today is Pi day and also, most appropriately, Einstein’s birthdate. Time for some Pi day fun for kids. The value of Pi is approximately 3.14 so March 14th is obviously the day to celebrate. Isn’t it amazing that Einstein, the most famous mathematician, was born on this … END_OF_DOCUMENT_TOKEN_TO_BE_REPLACED

Children’s play counts when it comes to early learning and development so an idea for a play-of-the-day is Star Wars math  counting and patterning. Not having Star Wars characters and toys isn’t even a problem. We have a few but not enough to count—pardon the pun—so instead we used some glow-in-the-dark stars that came from … END_OF_DOCUMENT_TOKEN_TO_BE_REPLACED