Can Boys Dress Up As Princess Leia?

Dress-up play for boys is as acceptable as it is for girls. Can a girl dress up as Han Solo? Yes, Can a boy dress up as Princess Leia? Still yes. Even if those two possibilities create different reactions in adults, it’s all the same to kids. 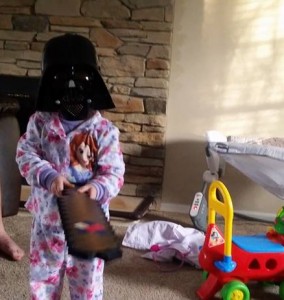 To a girl, dressing up and pretending to be Han Solo, can mean exploring how it feels to battle with an enemy, to be strong and somewhat irregular. Similar to boys trying on that character. To a boy, dressing up and pretending to be Princess Leia, could mean exploring how to be powerful in a different way, by being a leader who is responsible for others but also a fighter. Like girls do during play. Why might kids, both boys and girls, so often choose to be Darth Vader?

Why should girls dressing up as boys, and boys dressing up as girls, so alarm the adults? It isn’t uncommon for young kids to dress up as the other gender. According to Children’s Services Coordinator, Greg Uba, at Connections for Children,

“When children are allowed to play outside their roles, it gives them the opportunity to go beyond gender bias. Crossover play allows them to develop skills they traditionally aren’t encouraged to develop.” (A Place of Our Own: Cross-over Play)

Understanding ourselves and others is a challenge that begins in childhood and lasts our whole life long. Dress up play gives children a chance to discover how various possibilities feel. They see actions from inside, from the perspective of the doer. This encourages empathy and awareness of others. Kids get to try different ways of relating to others.

Besides social and emotional skills, dressing up also supports the development of such critical thinking skills as problem-solving and visualization. Imagination and creativity get a chance to shine like stars, no matter which Star Wars character they may choose.  Is there a favorite–other than Darth Vader? What are your thoughts on dress-up play for boys?