February has another exciting event this weekend: Super Bowl and Super Bowl reminds us about the importance of physical activity for kids.

While the Super Bowl itself has only been around since last century, the history of sports goes back at least as far as Ancient Greece. Throughout the ages, people have understood the benefits of having a healthy, fit body. Sport is one way of being active. 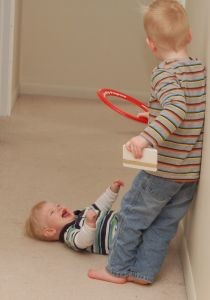 For young kids, there are countless ways of being active, even inside. It would be nice, if like the ancient Greeks, we had neighborhood gyms. Even during miserable weather, there are things kids can do in the house. As kids play, they reach, stretch, bend, and move. We can give them space to play, even in a hallway because they are usually pretty clear of furniture. Kids can move down a hall in a variety of ways. How would an elephant walk? Despite their size, elephants do not stomp. They take big steps but are quiet. How about a crab? Lizards would move right close to the floor. 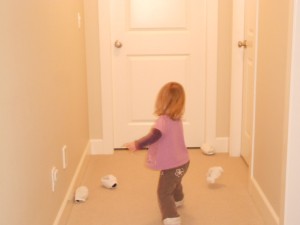 One day in the winter, we rounded up some old socks and rolled them into snowballs. Little Sister really enjoyed throwing the snowballs down the hall. If there’s an open space, kids also like to throw a scarf up in the air and catch it before it falls to the floor. Another way to encourage kids to move is to put on some music and let them dance. We can dance along too. Check out YouTube for some yoga videos for kids. 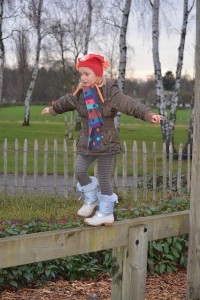 Outside time has lots more space to run and jump. Is there a neighborhood playground or park? Walks in the neighborhood are another way to be active. There might be puddles to jump in, snow to play in, or dry ground for kicking around a ball. Fences and rails add in the challenge of balancing.

These are just a few ideas for physical activity for kids. Maybe these could be warm-ups for Super Bowl?