Not only does this pumpkin baking soda vinegar volcano create a gas (carbon dioxide), it is a gas, as in lots of fun. It’s a great science experiment too. 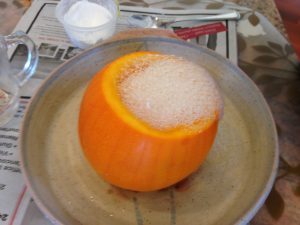 Although baking soda and vinegar are inexpensive, the bigger the pumpkin the more of it you will need. Smaller pumpkins are easier for the bubbles to fizz right over the top and all down the sides. The first thing you and your child need to do for this activity is to slice off the top of the pumpkin. Then, hands need to take out the insides. This can be pretty gooey. Save the seeds and strings from inside the pumpkin in a plastic bag or small container for another activity. Once the pumpkin is ready, put it in a big flat dish to catch the ‘lava’ so it doesn’t go all over. You may want to put some newspaper or an old towel on the table, counter, or floor. 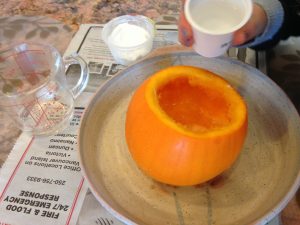 Depending on the size of the pumpkin at your house, the soda-vinegar solution can be made in a plastic container inside the pumpkin or right in the pumpkin. Ours was small enough to go in the pumpkin. (We used ours earlier to make a dip for snack.) Little Sister poured in about a cup of warm water. Next, she squirted in one squeeze of liquid dish soap. Using a tablespoon, she scooped in 2 big spoons of baking soda. I poured out a quarter cup of vinegar into a measuring cup and she dumped it into the volcano. Right away it started to fizz and bubble and while we watched the foam grew and grew. The pumpkin volcano exploded into white lava. 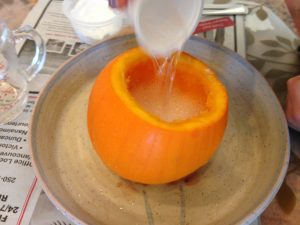 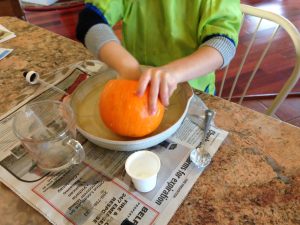 Science experiments usually start with a prediction about what will happen. Little Sister has played with vinegar and baking soda before so expected it would fizz up. To introduce a bit of uncertainty, I asked her if same thing would really happen again. She thought it might go all over the kitchen. Thankfully, that didn’t happen. But it was fun to try. Is there a pumpkin scientist at your house?