Volcanoes aren’t the only way to have baking soda and vinegar messy sensory play fun and learning. Almost anything works, play clothes advised. 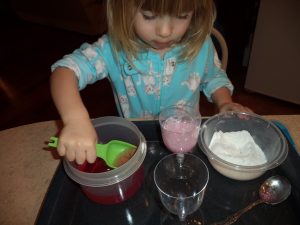 For this messy and sensory play, we used a plastic bowl of baking soda, another one of vinegar, a couple of spoons, and some clear, plastic goblets. A shallow container or tray underneath needed to keep the fizz and foam from spreading all over the table or floor. Some newspapers or an old towel were also under the tray, in case of accidents. A few drops of food coloring added to the vinegar made it easier to see. We used red.

To start, Little Sister measured a big spoon of baking soda into a goblet. Then, she poured a spoon of vinegar on top of the baking soda. Immediately, the vinegar started to fizz and bubble higher and higher almost to the top. She wanted to make it bubble over the top so added in more soda. There was more fizzing, but not enough. She choose to use a scoop since it held more and added one spoon of vinegar and then another. This time the solution did overflow and spill down the sides of the goblet. 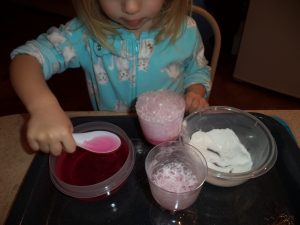 She scooped and spooned for several minutes, and the fizz spread out on the tray. She stirred the fizz and also used her fingers to mix. The feel of it appealed to her, so she soon put her entire hand in the other one, rubbing her hands together. For quite a while, she explored the sensations, adding baking soda and vinegar to the tray with the spoon again and smooshing the fizz. When she’d had enough, she dried her hands on the towel and got down. We washed her hands with soap and water too.

While Little Sister’s hands were busy, so was her brain. In addition to the sensory aspect, there was problem-solving, testing cause and effect, and predicting. While she played, she talked to herself, and occasionally asked me to come see. She directed her actions, making choices about what to do. We can’t see the learning connections but the busy, happy play showed they were being made. 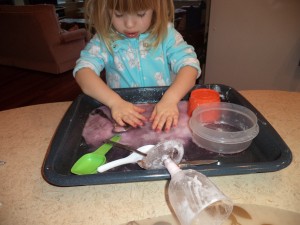 With ingredients you likely have in your kitchen, can your child have some baking soda and vinegar messy sensory play fun and learning too?

Can You Come Play?

Tomorrow, we’ll do another messy play activity. Can you and your child come back here to play?

Science learning fun is a super wish for early programs for kids. Science is part of school for older kids, but younger kids love science too. It’s more than another subject, it’s like a setting or channel in the brain for interacting with the world. 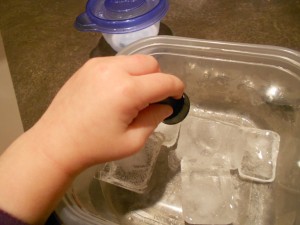 This series of blog posts is inspired by parents and caregivers. They’ve answered the question, “If you had a wish or magic wand for something for kids in a program like preschool or kindergarten, what would it be? One parent wished for some great science activities. Ones that nourish the brain and children’s spirit of curiosity.

This is almost like the quote from Eleanor Roosevelt, “I think, at a child’s birth, if a mother could ask a fairy godmother to endow it with the most useful gift, that gift would be curiosity.”

Science doesn’t have to be complicated, and it doesn’t need expensive materials. Many of them can be found right at home. These videos from Raising Dragons  have some very doable science. They are definitely child friendly.

Baking soda and vinegar combine for some explosive learning. From volcanoes to a rainbow in a dish, it’s always a treasure to watch the action. Kids like action!

Orange you glad science can be this easy and this fun? Before trying the orange, ask your child what s/he thinks it might do in water. Will it float or sink? This builds on the curiosity.

Science ideas often come from kids themselves, as it says in the description for this one. White corn syrup and green food coloring create a work of art.

These are all activities that can happen in a kitchen at home, as well as on a table in a care center for kids. We really must nurture the sense of wonder in young children. Children are so naturally curious as they explore the world around them and seek to figure it out. Their questions now can bring answers for the future. Can science learning fun and play be part of your child’s day?

No matter how many times we’ve combined these two ingredients, this dragon vinegar baking soda science experiment was still exciting. Be prepared though, once isn’t enough! 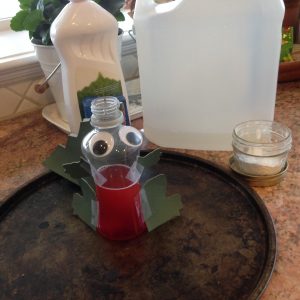 The kids wanted to do some dragon science, but what to do? We needed an idea. The thinking process for some dragon science fun was long and winding. There were big jumps of imagination instead of logic but that’s part of thinking too. Kids know dragons breathe fire but we didn’t want to use real fire for science. Hmmm. The kids said dragons are like dinosaurs, right? Maybe we could do dinosaur science. Dinosaurs aren’t alive anymore and some scientists think it’s because of volcanoes not meteorites. A volcano has fire like a  dragon, so maybe we could do that? A dragon vinegar baking soda science experiment?

Making a volcano with baking soda and vinegar is pretty standard but we didn’t know how to make a dragon volcano. After some google searching, we discovered a foaming dragon science experiment on The Joys of Boys. We all agreed this was a great idea and could hardly wait to make our own. 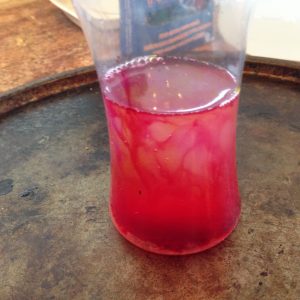 To make a dragon volcano is simple. Start with an empty water bottle. Cut a tail and 4 paws out of a foam sheet or something else green and plastic. In the sewing drawer, we had some vinyl left-overs from a patio cushion that would do and a tube of googly eyes. Tape the tail, eyes, and paws to the bottle. A big bottle will need more vinegar than a small bottle. Fill the bottle about half full of vinegar and place on a pan to catch drips. Squirt in some liquid dish soap. Add a couple drops of food coloring. We used red and yellow to make orange. Since we hadn’t mixed in the dish soap, the food colors made swirls in the bottle. It was really interesting to watch the red spread out in the vinegar solution. *At this point, the kids reminded me I’d forgot to tape on the dragon’s tail and paws. We had to pause for that.

Now, for the fun and exciting part. With the vinegar, soap, and color in the bottle, what do you think will happen when we add some baking soda? Will it bubble right out of the bottle? The reaction starts as soon as a little bit of soda hits the vinegar. It only needed a small scoop of baking soda for orange foam to start bubbling up, out, over, and all down the side of our dragon. This dragon was breathing hard and it was orange like fire. It even worked again with a second scoop of baking soda.

Good oldstand-bys. This dragon vinegar baking soda science experiment was so much fun. The kids proved it works once again, were engaged, had lots to talk about and certainly lots to think about. Could this be a play-of-the-day for your child?

Not only does this pumpkin baking soda vinegar volcano create a gas (carbon dioxide), it is a gas, as in lots of fun. It’s a great science experiment too. Although baking soda and vinegar are inexpensive, the bigger the pumpkin the more of it you will need. Smaller pumpkins are easier for the bubbles to … END_OF_DOCUMENT_TOKEN_TO_BE_REPLACED

Bubble, Bubble, Fizz, and Pop Soap and water aren’t the only ingredients for bubbles. Another way is baking soda and vinegar science fun. Just a bit of makes lots of fun and learning. Scoop some baking soda into a small bowl, fairly flat container, or even a clear plastic wine glass. Set this in another … END_OF_DOCUMENT_TOKEN_TO_BE_REPLACED

Here’s a secret formula proving kids play with anything: Play with Baking Soda and Vinegar = Explosions of Fun. Sometimes called how to make volcanos. Baking soda and vinegar cannot be considered toys but they combine for some amazing play. They are inexpensive and affordable, but with all these ideas, you might need the extra … END_OF_DOCUMENT_TOKEN_TO_BE_REPLACED

Star Wars activities for kids do not need expensive toys or high-tech materials. Your kitchen cupboards likely have some items you can use for some science fun about stars. Yesterday, we looked at some pictures on the computer about stars and star dust. In one, there were gazillions of little white specks covering a dark … END_OF_DOCUMENT_TOKEN_TO_BE_REPLACED

Staying up for fireworks can be hard for kids—and adults. Instead, kids can enjoy this paint fireworks craft in all their favorite colors before bedtime. Besides paint, use a couple of toilet paper rolls. Because the rolls are harder to cut than thin paper, adult hands need to do the scissor part. Cut many narrow … END_OF_DOCUMENT_TOKEN_TO_BE_REPLACED

October is a fun time of the year for science magic for kids. There are some easy and simple science tricks that kids can do with ordinary household items. With a wave of a wand or a magic spell, wizards can make things float and sink. Partially fill a large bowl or container that you … END_OF_DOCUMENT_TOKEN_TO_BE_REPLACED